Daily Orange Sports and its transition covering games during COVID-19

Daily Orange Sports and its transition covering games during COVID-19

While covering basketball games for The Daily Orange, senior staff writer Danny Emerman would take a moment to listen to the announcer remind fans to be respectful, despite the fact that there were no fans in the stadium.

Emerman said it was strange to hear — especially from his courtside seat. Before the COVID-19 pandemic, Emerman said, members of the media weren’t typically given such good seats.

”They usually have us behind the basket,” Emerman said. “So that’s a plus, I guess.”

Seating assignments are one of the many ways in which covering sports for The D.O. has changed because of COVID-19. Reporters have made plenty of adjustments, including conducting interviews over Zoom and covering some away games by watching them on TV. But the sports staff continues to report on Syracuse University’s athletic events.

Reporters no longer get one-on-one interviews with athletes in-person as in years past, which creates some challenges.

“That has become much trickier without any human interaction, and you’re always just one small square on a Zoom screen,” Emerman said. “In our reporting, the way to get around that is trying to really emphasize backsourcing, so writing stories by talking to players, parents, and high school coaches, and trainers or whatever.”

Athletic schedules this year have been subject to sudden changes. Teams at other universities have canceled parts of their seasons. And games have been postponed or called off at the last minute due to COVID-19 exposure.

No matter how much the sports team plans its coverage, there’s still uncertainty. 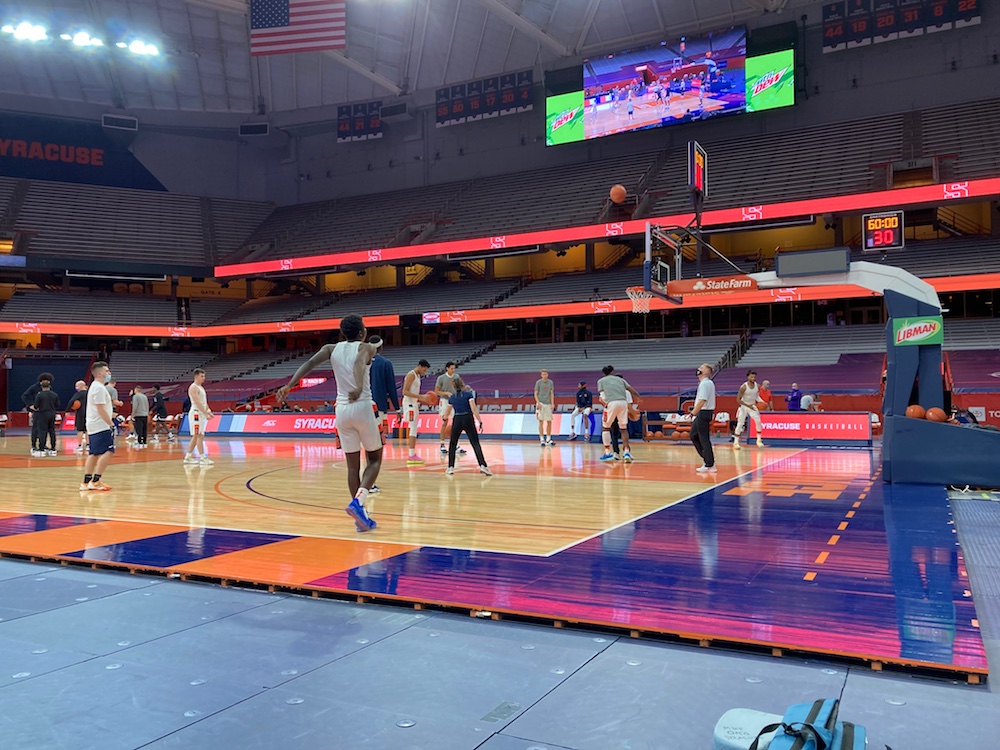 With Syracuse’s basketball season in the home stretch, our beat writers have continued to cover in the Carrier Dome with Zoom press conferences. Courtesy of Danny Emerman

Sports editor Roshan Fernandez said he never knows for sure if a game will be played until it starts. When kickoff for SU’s first home football game was delayed because of last-minute coronavirus testing, football beat writer Adam Hillman was left trying to figure out if there would still be something to cover that day.

Beat writers with The D.O. have also been unable to travel to as many away games as they typically do. And instead of having two beat writers at each game, now only one writer attends while the other covers the event by watching it on TV.

“Covering games from home, just watching on your TV, is really, really difficult,” Emerman said. “The whole point of the coverage, at least in my view, is that you’re trying to teach a reader something that they didn’t see or something that you can’t pick up on just by watching the game. So if the people writing about it are also just watching the game, that kind of makes it impossible.”

Still, writers have worked hard to maintain the quality of their coverage and provide insight to readers.

The sports staff has also noticed a difference in the players during the pandemic. When the men’s basketball team played Georgetown, a matchup that would normally attract huge crowds, players said it didn’t feel like a rivalry game. The mental effect of the pandemic on players has made it harder to get them to open up, said Anthony Dabbundo, a senior staff writer who covers football and men’s basketball.

The D.O. sports team has reported on other ways that the pandemic has affected athletics.

Student athletes are in a bubble and told to keep their distance from other students to avoid coming in contact with the virus. Players on the men’s basketball team wear wristbands that track when they’re around each other to help with contact tracing. That’s something that Dabbundo wrote about for the 2020 Basketball Guide.

Whether covering the effect of the pandemic, current games or retrospectives on past SU athletics wins, the sports team has adapted its coverage with COVID-19. They’ve focused on the human side of athletics, which Emerman said is always important.

“We need to be considerate of the human stories that we can tell, because I think those are the strongest ones generally,” he said.