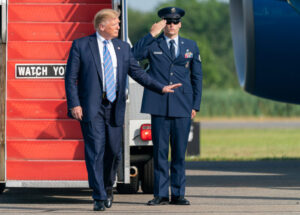 Donald Trump departs from Air Force One, image via Picryl

EXECUTIVE SUMMARY: Former US President Donald Trump’s foreign policy legacy was, on the whole, a major success. From Asia to Europe and through the Middle East, he managed to achieve many notable “firsts.” He left behind peace deals and initiatives while eliminating terrorists and confronting strategic threats in an unprecedented and unorthodox manner.

Donald Trump succeeded in accelerating and deepening a slow political and social transformation that began in the US nearly two decades ago. His revolutionary method of dealing with foreign policy issues was a political shock to the system that stood in stark contrast to the approaches of his predecessors, who preferred not to stray from the traditional path.

In Asia, the former president made an unprecedented effort to solve the problem of North Korea, an area in which US policy had not seen any breakthroughs since 1953. Trump took an unorthodox approach and showed a political resolve that many US presidents lacked, despite his never having been a politician. At the Korean DMZ, he briefly crossed the border into North Korea, making him the first sitting US president to enter that country. Had it not been for Chinese pressure on Pyongyang to thwart a Trump success, the most heavily fortified border in the world could have ceased to exist during his term.

The so-called “Trump-Tsai call” in December 2016 marked the first time since 1979 that a US president or president-elect had spoken directly to a Taiwanese president. Trump’s administration was the first to put great economic pressure on Beijing to contain its expansionist ambitions, and was the first and only government in the West to publicly blame China for its role in the coronavirus pandemic. In 2017, Trump managed to revive the Quad, or Asian NATO, which is a strategic forum between the US, Australia, Japan, and India to counter increased Chinese influence in the Asia-Pacific region.

In Europe, Trump brokered a landmark agreement last year between Kosovo and Serbia on the normalization of relations in which the countries agreed to restore flights between Belgrade and Pristina for the first time since the war in 1999.

Trump also achieved a historic accomplishment by mediating peace deals between four Arab states—the UAE, Bahrain, Morocco, and Sudan—and Israel within a matter of months, a feat unmatched by any of his predecessors. Trump proved to be the first US president to keep his election promise of recognizing Jerusalem as the capital of Israel, and he was the first sitting US president to visit the Western Wall.

Sudan is now closer than ever before to the US. Just 25 years ago, Khartoum was sheltering Osama bin Laden while Bill Clinton was preoccupied with his sexual scandals, allowing the founder of al-Qaeda to relocate to Afghanistan and plot the 9/11 terrorist attacks.

It was Trump who, within a span of 10 months, eliminated ISIS leader Abu Bakr Baghdadi, al-Qaeda’s No. 2 Abu Muhammad Masri, and Qassem Soleimani, the mastermind behind Iran’s military and subversive operations in the Middle East. Masri, who played a prominent role in planning the bombings of the US embassies in Kenya and Tanzania, was targeted in a joint operation with Israeli agents on the 22nd anniversary of the attacks, which occurred while Clinton was in power.

Trump’s predecessor, Barack Obama, who was awarded the Nobel Peace Prize just nine months after taking office with no achievements whatsoever to justify that prestigious prize, left him the political legacy of a defeatist nuclear deal with Iran, from which Trump withdrew. Obama also left Trump with overwhelming chaos in Syria, where Bashar Assad crossed Obama’s chemical red line with no retaliation. It was Trump, not Obama, who launched airstrikes targeting Damascus’s chemical arsenal for the first time.

The core of Trump’s foreign policy view was to avoid random wars and push for peace while at the same time undermining forces that pose a threat to global prosperity, security, and stability by constraining them politically, militarily, and economically.

Nevertheless, the left-dominated American and Western media viewed Trump’s foreign policy with cynicism, skepticism, and prejudice, despite the fact that he was the first president in decades not to enter into any foreign wars during his tenure.

Trump broke the political chain that had prevailed for decades in the US. In the process, he seemed to prove that his base is greater than that of the Republican Party itself.

Though Trump lost the election, Trumpism was not defeated. On the contrary: it took root and has become the wild card in the American political equation. It might even spread beyond the borders of the US and become a global movement against the “deep state,” wherever it may be.

Rauf Baker is a journalist and researcher with expertise on Europe and the Middle East.