Humans have not evolved to exercise, says Harvard prof

Humans have not evolved to exercise, says Harvard prof

If given the choice between chilling on a couch or going for a run, most of us would gleefully pick the couch. It turns out, that’s an evolutionary reaction.

The desire to reduce our caloric output is a natural response to needing to conserve energy, says Daniel Lieberman, a professor of human evolution and biology at Harvard University, and the author of Exercised: Why Something We Never Evolved to Do Is Healthy and Rewarding.

“When it used to be sort of required, spending extra energy doing physical activity was a bad idea,” Lieberman explained in an interview with The Current’s Matt Galloway.

Now that our modern world is filled with countless inventions designed to prevent us from exerting ourselves, Lieberman says we have to work at ignoring that evolutionary response.

Here’s part of their conversation.

How could humans not have evolved to exercise?

But exercise is a special kind of physical activity. It’s discretionary, it’s voluntary, it’s when we do physical activity for the sake of health and fitness. And so when I go for a run today, that’s exercise.

There are people in the book that you refer to as exercists. Who are the exercists amongst us?

Yeah, so we all know exercists. They’re that kind of annoying people who nag and brag about exercise, you know, tell you how many pounds they lifted to the gym. They just kind of make us feel bad about whatever it is that we do.

What is wrong with those people and what is wrong — in terms of what they do — with how then we end up thinking about exercise.

That’s the reason I entitled the book Exercised. We get exercised about exercise. We get anxious and confused and sort of nervous.

The biggest reason that people get nervous is that they’re made to feel that they’re lazy, that somehow there’s something wrong with them if they don’t run marathons or they don’t go to the gym and lift huge numbers of weights or whatever.

The example I love to use is in a mall or an airport or something like that and yet there’s an escalator next to a stairway, right? And … there’s that little voice in your head which says, take the escalator, right? And even though there were no escalators in the Stone Age, obviously, it’s still a basic, fundamental and sensible instinct to avoid unnecessary physical activity.

And yet we’re made to feel bad for that little voice. And it may be good to overcome it, but we shouldn’t feel like there’s anything wrong with this, or that we’re somehow abnormal for wanting to avoid unnecessary exertion. That’s the most natural thing in the world.

There’s been a lot of research done on exercise. What is it that concerns you about how that research in past has been conducted, particularly when it comes to physical activity, what we need from physical activity?

It’s not so much the research that concerns me. I think it’s the way that we’ve packaged it and conveyed it. You know, we pick up the newspaper or click on a website and you read an article [saying] wear this kind of shoe; two days later, you read a completely opposite article [that says to] wear a different kind of shoe. Or you read that you should do this amount of weight. We get this information, these little sound bites that are often contradictory.

And then the other thing is that we’ve kind of medicalized and commercialized how we think about physical activity. I don’t know the data in Canada, but in the United States, only about 20 percent of Americans get the minimum level of physical activity that’s recommended by every major health organization on the planet, which is 150 minutes of moderate to vigorous physical activity a week.

And it’s not like people don’t know that exercise is good for them … it’s that the medicalization and commercialization and commodification of physical activity, of exercise, has clearly not worked.

And I think that an evolutionary approach and an anthropological approach can help us do a lot better in a more compassionate way.

What have you learned in that research about physical activity that perhaps we could learn here? Just in part, around the idea … that we’ve evolved in some ways to be as inactive as possible.

I mean, there’s several ways to answer your question. So, one is that we have the sense that our ancestors used to be active all the time. That our ancestors were … incredible athletes who could just get up in the morning and run marathons and, you know, worked tirelessly all day long. And the answer is, sure, they worked harder than your average American or Canadian, but they didn’t work that hard.

Typical hunter gatherers spent about two and a quarter hours every day doing moderate to vigorous physical activity. That’s not a huge amount.

We have to choose to be active and we never evolved to do that.– Daniel Lieberman

So we’ve kind of got this kind of bizarre notion about sort of physical inactivity. We think that, you know, we rush out and buy standing desks and kind of think that that’s like exercise, which isn’t right. And we demonize chairs.

And the other hand, we also have these lives where we were so physically inactive, the average American in their 20s or 30s is active only about twenty-something minutes a day. And by the time people are in their 50s or 60s, they’re active about 12 minutes a day. That’s way, way lower than what’s evolutionarily normal. Right. Which is, you know, several hours a day. And and we’re paying a price for it.

What about walking? You talk in the book about why it is that humans are efficient walkers.

If there’s any one physical activity that we evolved to do, it’s walking. We are champion walkers, right? And your average hunter-gatherer walks, you know, between five to nine miles a day, which is extraordinary. That’s like walking from Los Angeles to Washington, D.C., every year.

And we have all kinds of beautiful, elegant adaptations in our body that make us really good at it.  And that’s actually one of the reasons why it’s hard to lose a lot of weight through walking because you just don’t spend that much energy walking. A typical person walking a mile burns about 50 extra calories, which is not a lot.

But walking just turns on so many aspects of our cellular biology that … have all kinds of incredible benefits in terms of our immune systems, our cardiovascular systems, our every … system of your body. And it’s one of the reasons why walking is so unbelievably healthy. 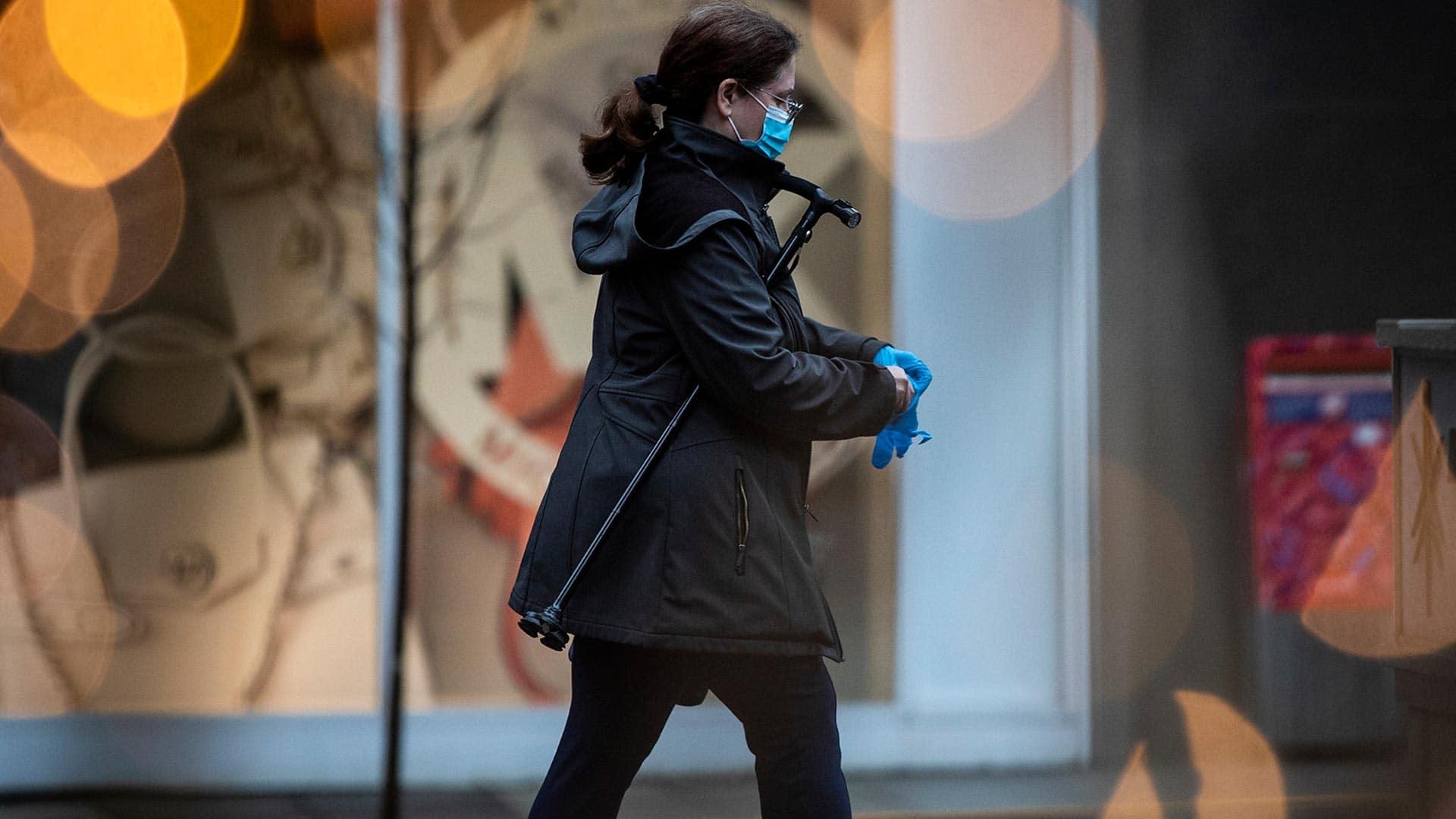 New activity guidelines from the World Health Organization urge people to start moving more during the pandemic. But it isn’t necessarily recommending a sweaty workout, just more activity in general. 2:06

And yet one of the chapters, I mean, there are a number of myths that you kind of tackle head on in the book. One of the chapters is titled “The Importance of Being Lazy.” Why is it important to be lazy?

From an evolutionary perspective, until recently, energy was limited. People struggled to get enough calories to get through the day and pay for themselves and their children’s bodies, right. And when and when energy is limited, every time you spend energy on one thing, you’re not spending on something else. You have to engage in trade offs, right?

Yesterday, I went for about a five mile run, and that meant I spent about 500 calories. Now, if I were energy limited, those would be calories that I couldn’t spend on taking care of my body, or if I was a nursing mother, energy that I would use to to synthesize milk, which is really expensive. Nursing is really calorically expensive.

Taking it easy when you didn’t have to exert yourself was an adaptation. It’s useful. It’s good. But now, of course, we have this very strange modern world where we no longer have to be active at all. And now we have to do the reverse, we have to choose to be active and we never evolved to do that.

Written by Lito Howse. Produced by Rachel Levy-McLaughlin. This Q&A was edited for length and clarity.