MPH: Hamilton’s slick strategy — ‘He just knows what to do’

MPH: Hamilton’s slick strategy — ‘He just knows what to do’

This was a race of tyre temperatures, and their wild variation between cars at different stages of the weekend. This was why the car which had been on pole for every race this year qualified 5.5sec adrift of pole around the Istanbul circuit. Ultimately, it was also why that car was good enough for Lewis Hamilton to clinch his seventh world title by winning the race.

The Istanbul Park circuit’s resurfacing was completed only 10 days before F1 arrived. That’s just the sort of inevitable thing that can happen in this pandemic-effected season. The sport, restricted to where it can hold grands prix, is renting old venues at short notice. Or new venues never before used for F1. Hence, just like at Portimao, the circuit was still oozing bitumen. The surface itself was also extremely closely-grained, almost glass-like in its smoothness.

A tyre will struggle to find grip on such a surface. Its chemical grip will be restricted by the tyre sliding across the oily surface rather than forming a bond with it at molecular level. Mechanically, those small pores don’t give the tyre’s structure much to bite into and grip against. Therefore the tyre’s core remains rigidly inelastic and cold, unable to support the tread. The tread, in turn, is unable to feed the loads into the core which would heat it up. It was like that in Portimao, but it was way more extreme here. Drivers were laughing in disbelief when they first went out. “I cannot even stay flat on the straight!” said Lando Norris.

Whichever car could best generate tyre temperature was going to be looking good here. Whether that was a slick tyre, an inter or a full wet. The car that could best do that turned out to be the Racing Point. Which is essentially last year’s Mercedes. This year’s Mercedes couldn’t get anywhere near the tyre temperature window unless you gave it at least seven laps. Which is a luxury qualifying doesn’t grant you. So Lance Stroll put his Racing Point on pole, from Max Verstappen’s Red Bull which had been quicker on the easier-to-warm full wet but slower when the track became dry enough for inters in Q3. Champion-elect Hamilton was sixth, 5.5sec slower than Stroll. 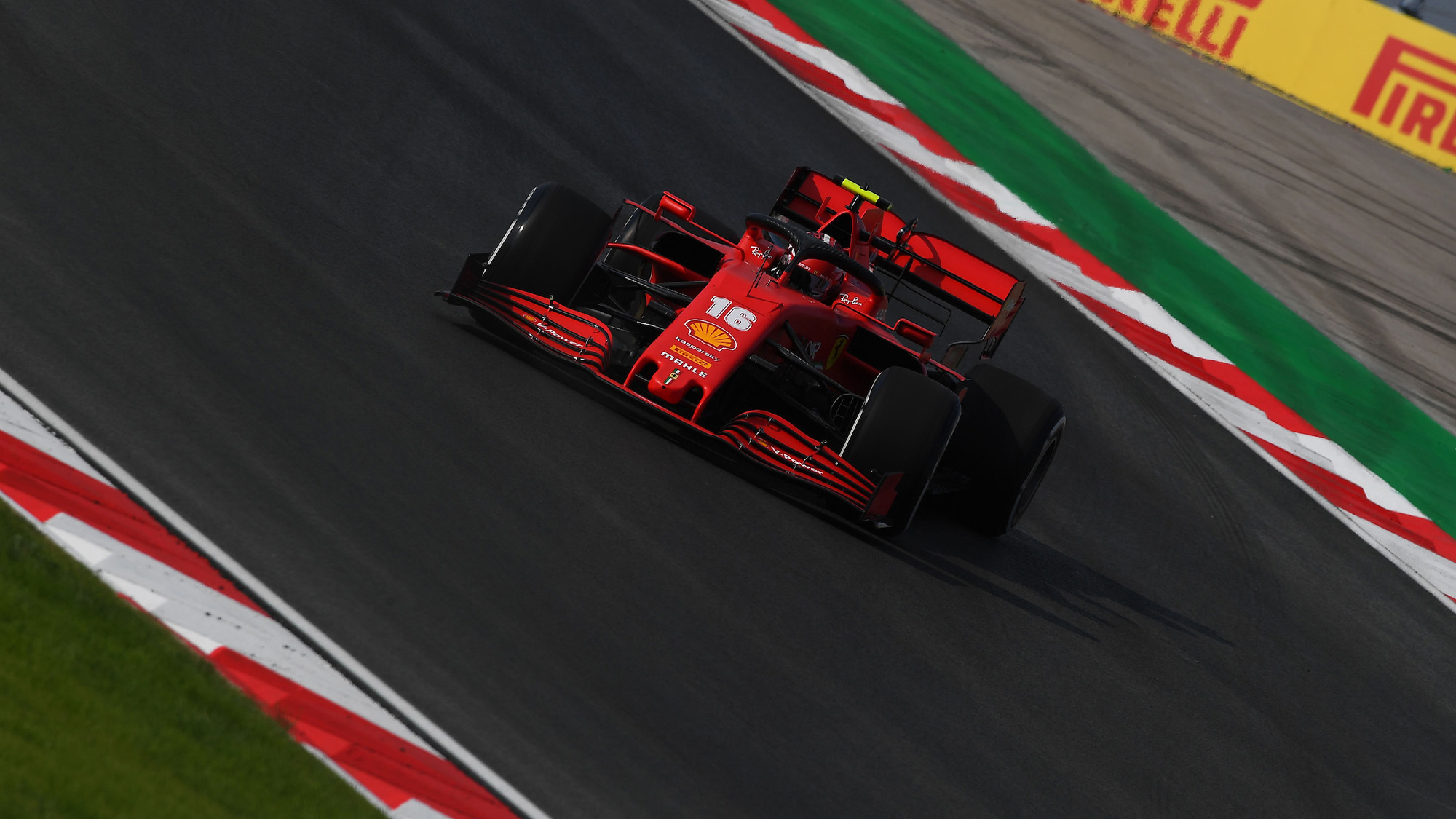 Charles Leclerc slides on the slippery tarmac in free practice

Why was last year’s Mercedes so much quicker at generating tyre temperature than this year’s? The whole focus of this year’s car was to get the aero balance further back, by increasing rear downforce. Last year’s car, Hamilton felt, was too limited in slow corners by understeer. That sounds counter-intuitive, right? But actually, it’s not. He wanted a car that could get through the understeer phase quickly by rotating more from the rear. To have a car that rotates more suddenly without developing into a rear slide required more downforce. Hence the layout of the rear suspension, with the lower wishbones swept back to an extreme degree, by mounting them into the crash structure rather than the gearbox. This opened up a far more favourable route for the airflow between the inner face of the rear tyre and the diffuser walls. Which improved diffuser performance and hence the downforce generated by the underfloor.

This also helps contain the rear tyre temperatures. The usual challenge is to prevent the rear tyres from overheating. Downforce will do that. But in the extreme low-grip conditions of Istanbul, the way the rear downforce was protecting the rear tyres was preventing them generating temperature quickly enough.

But once they were up to temperature, the car would revert to being the quickest. All it needed were seven consecutive laps. So race day held a lot more promise than qualifying might have suggested.

Here’s how that pattern played out:

Stroll and Perez ran an early 1-2 for Racing Point, with Hamilton back in sixth. Verstappen was trapped behind Sebastian Vettel’s third place Ferrari until it pitted out his way.

Hamilton pitted for inters at the end of lap eight. Stroll pitted a lap later.

When Vettel pitted out of Verstappen’s way on lap eight, the Red Bull showed again that on full wets it was the fastest car, with both Verstappen and Alex Albon lapping in the 1min 51secs before pitting. But onto the inters for stint 2, the Racing Point would again pull away in the early stages by generating instant tyre temperature.

Slow initially, with enough laps the Mercedes pace picks up dramatically. The Racing Points are still running 1-2, with Hamilton now fifth. But such is his greater pace that Hamilton is quickly closing down what had been a 20sec deficit to Stroll. Verstappen’s spin and pitstop moves Hamilton up to fourth. He catches Albon, who spins on his expired tyres on lap 34, putting Hamilton third behind only the two Racing Points.

Hamilton is able to lap even more quickly once Vettel’s Ferrari pits out of his way on lap 33. With his inters now past their graining phase and wearing into virtual slicks ideal for the gradually-drying track, he is only 3.7sec behind Stroll when the latter is forced to pit for new rubber on lap 36.