Modern life is nothing if not comfortable—and what’s comfier than taking a seat? What with work, Netflix, and everything in between, most people spend much more time each day sitting than standing. Research published in JAMA in 2019 found that the average U.S. adolescent sits for 7-8 hours daily, while the average adult takes a load off 6 hours every single day.

If you think that sounds bad, remember those numbers are from before the pandemic. Another study, published in Frontiers in Psychology, focused on lifestyle changes brought on by COVID-19. The researchers reported a 28% increase in time spent sitting all over the world. So, if you’ve been lounging more than usual over the past year and a half, you’re definitely not alone.

So why is lounging for long hours so bad for us? When we sit down, our leg muscles stop working. That means the largest muscles in the body take in minimal sugar from the bloodstream, consequently slowing the metabolism and interfering with blood sugar regulation, fat breakdown, and blood pressure. The end result of those metabolic changes is more sugar and cholesterol in the bloodstream, which means a greater risk of diabetes and heart disease. Many scientists and doctors in recent years have even gone so far as to call “sitting the new smoking.”

If you work a job that necessities long hours spent sitting, reading all this may be more than just a little worrying. Luckily, a new study just published in the American Journal of Physiology-Endocrinology and Metabolism has uncovered a simple way to counter the harmful health effects of sitting all day. Read on to learn more, and for more great exercise advice, don’t miss the Secret Side Effects of Lifting Weights for the First Time, Says Science. 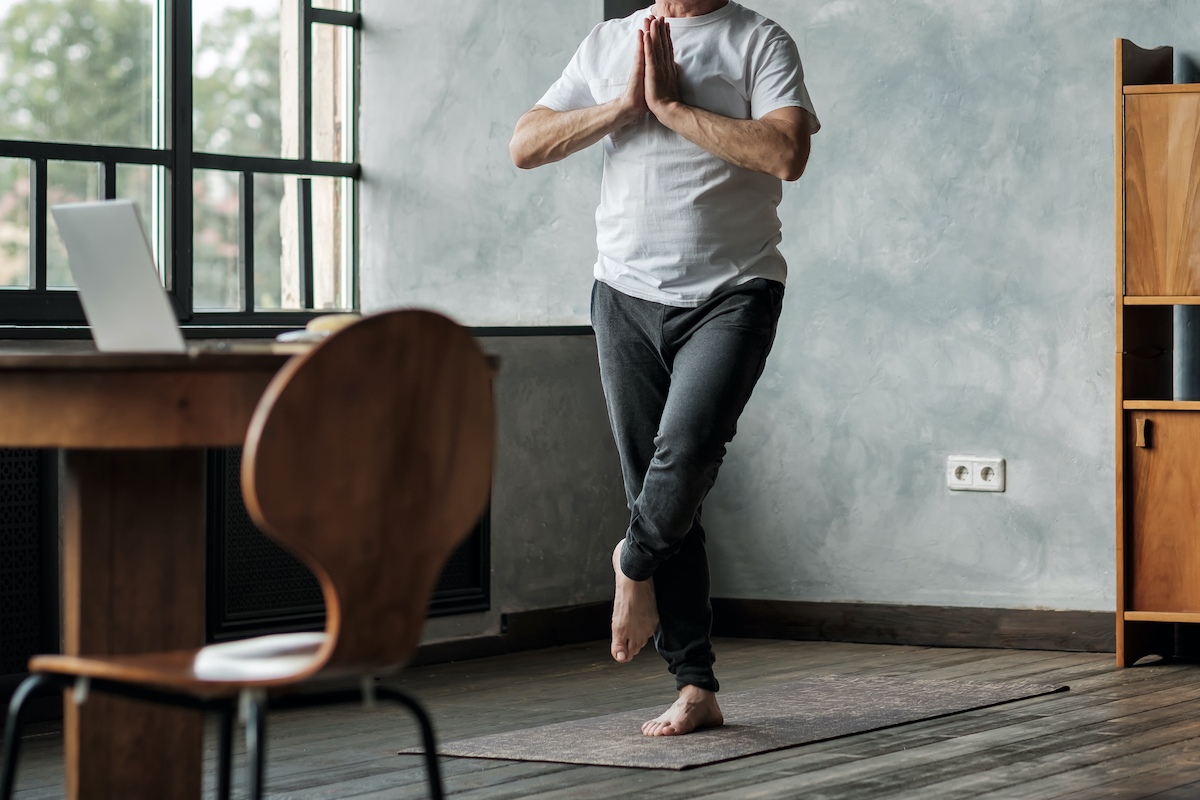 Study authors advise getting up and spending 3 minutes walking, climbing some stairs, or even busting out a few jumping jacks for each consecutive half hour spent sedentary. This approach appears to help offset some of the harmful effects of sitting. At the very least aim for 15 steps as a bare minimum during each 3 minute break.

When a small group of study participants followed the above instructions, their daily blood sugar fluctuations improved. Subjects also showed lower levels of bad cholesterol and fasting glucose. Researchers say these changes are likely due to improvements in blood flow sparked by more movement.

Know that this strategy isn’t going to undo all of the unhealthy effects associated with sitting. If you have the time to get up and move for more than just 3 minutes, by all means do so.

The 30min/3min strategy didn’t end up improving either overall glucose tolerance or fat content in the muscles of participants. So, researchers conclude that getting in at least 15 steps every 30 minutes likely represents the bare minimum in terms of staying active throughout the day.

In other words, it will help improve metabolic health, but it isn’t going to work any glucose tolerance miracles. More sustained physical activity patterns for longer periods of time are necessary for that. Still, study authors say cumulatively over time sticking to the 30min/3min strategy may be enough to help many avoid type-2 diabetes.

The research team, based out of the Karolinska Institute in Sweden, gathered together 16 middle-aged obese men and women living sedentary lifestyles. Everyone wore an activity monitor during a normal week, and underwent a series of metabolic tests. This was performed to attain some baseline activity/metabolic data.

From there, half of the subjects were placed in a control group, and told to continue living their usual day-to-day life. The other half was assigned to the active group, and instructed to download an app on their phone that sent out alerts every 30 minutes with a reminder to get up and move around. After three weeks had passed, all subjects underwent another series of metabolic tests.

While plenty of prior studies have investigated the influence of activity breaks on sedentary living, this work separated itself from the pack by allowing subjects to live their usual lives. Most prior studies have been confined to laboratory settings and much shorter periods of time.

“To our knowledge, this is the longest duration study to investigate the impact of [frequent activity breaks from sitting] and, as such, our findings have important translational implications,” researchers note. 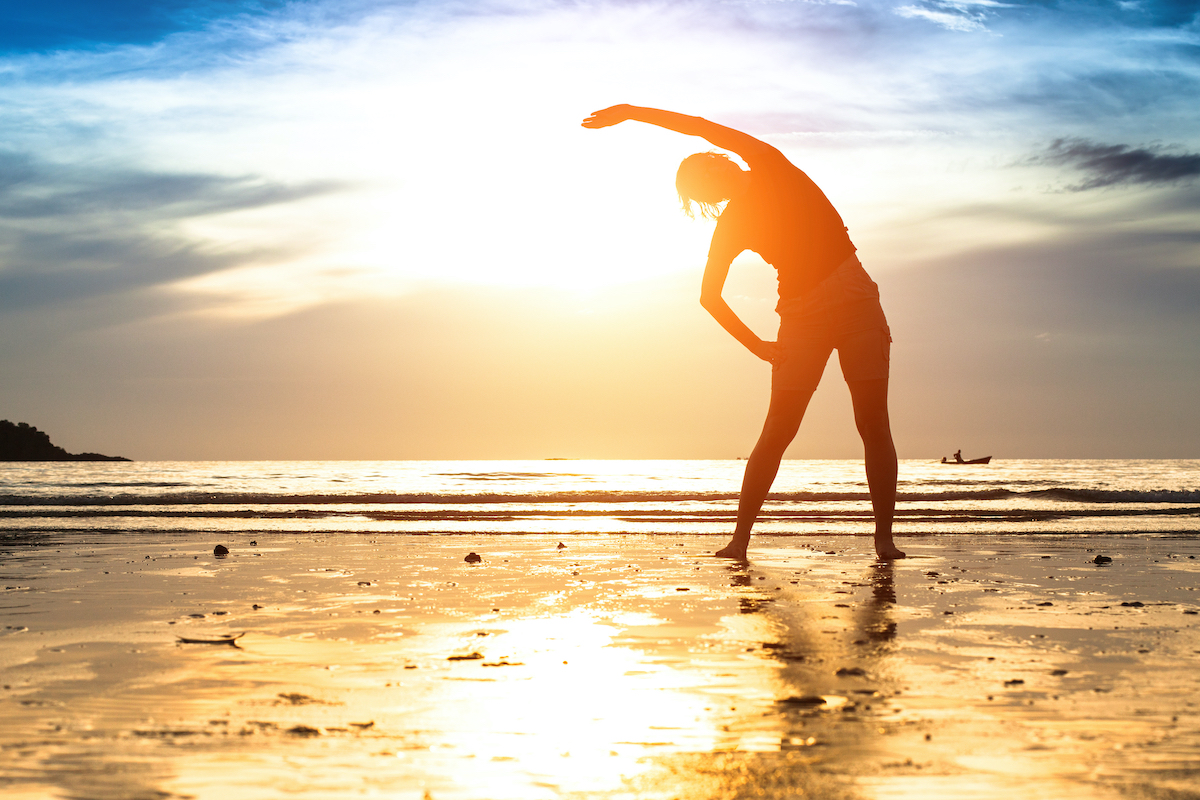 We all want to move around and exercise more, but there are only so many hours in the day. Not to mention it can be tough to get up every half hour at work while engrossed in an important project or attending a big meeting. Study authors suggest setting an alarm on your phone to help you remember to get up and move around. Even a short stroll to the bathroom is enough.

If you can’t stick to the 30min/3min rule every single half hour of every single day, don’t stress over it. Instead, try to inject more movement into other areas of your life.

“Fire the gardener, do it yourself,” Cathy Spencer-Browning, VP of Training & Programming at MOSSA, a group fitness provider, once told us. “Carry your own shopping bags, park far away from the entrance to the shop and get there in a hurry, take the stairs—every single time, walk around while on the phone, do your house chores the old-fashioned way—getting down on your knees. In any and every way choose movement over sitting.” And for more on the harmful effects of a sedentary lifestyle, see here for What Happens to Your Body When You Sit Too Much Every Day, Say Experts.