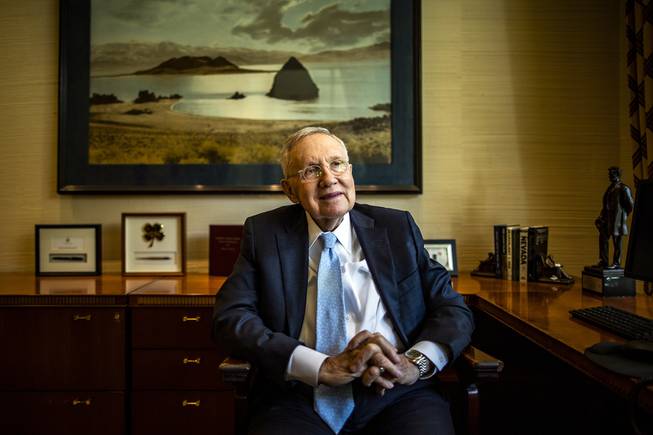 We have a problem with our international airport, Las Vegas. It’s named after a virulent anti-Semite and xenophobe who shouldn’t be lionized anywhere, much less on our gateway to the world.

But we also have an elegant solution on the table. We can replace the current namesake of McCarran International Airport with former Sen. Harry Reid, who exemplifies our diverse community’s values and is richly deserving of being memorialized for his remarkable contributions to our city and state.

Clark County Commissioner Tick Segerblom has proposed renaming the airport, which has carried Sen. Pat McCarran’s name since 1948. In suggesting that Reid replace McCarran, Segerblom resurrected an idea he brought to the state Legislature in 2017 when he was a state senator.

The proposal didn’t go anywhere back then, but its time has come. It’s a great idea.

Reid, a steadfast champion of equality and fairness during his decades of public service to Nevada, is a resoundingly good choice for the renaming. He devoted his life to making the state a better place for all Nevadans, whether battling organized crime as a Nevada gaming commissioner, serving as lieutenant governor and as a state legislator, or spending 34 years in Congress as both a House member and senator.

A full accounting of Reid’s contributions to Nevada and examples of his work for all Nevadans would fill this page and more. But his commitment to diversity and social justice is reflected in the key role he played in such legislation as hate crimes protections, an updated Violence Against Women Act, the repeal of Don’t Ask Don’t Tell and the first federal statute barring discrimination based on sexual orientation and gender identity. His close alliance with former President Barack Obama and then-Vice President Joe Biden yielded the passage of the Affordable Care Act, which provided health coverage to over 20 million previously uninsured Americans, including more than 300,000 Nevadans.

Reid was a fierce protector of Nevada’s environment as well: He played a major role in blocking the development of the Yucca Mountain national nuclear waste repository, was a leading advocate of renewable energy development in the state, and led efforts to expand federally protected lands.

All the while, as the longtime leader of the Nevada Democratic Party, he provided wide-open doors of opportunity for women, Nevadans of color and members of the LGBT community to serve in leadership. It’s no happenstance that four of Southern Nevada’s five congressional delegates are Democratic women (Sens. Catherine Cortez Masto and Jacky Rosen, and Reps. Dina Titus and Susie Lee), the other is an African American man (Rep. Steven Horsford, also a Democrat), and that Democratic women and leaders of color make up a significant portion of the state Legislature. Reid’s focus on character and leadership ability instead of gender, race, etc., is among his many admirable attributes.

Then there’s McCarran, who stands in stark contrast to Reid.

Frankly, it’s shameful that McCarran’s name wasn’t erased from the airport long ago.

His dark legacy includes driving successful efforts to block millions of World War II refugees, including Holocaust survivors, from immigrating to the U.S.; being a lead architect of a sweeping 1952 immigration act with sharp restrictions on Jews; and vehemently blocking appointments of Jews to judicial positions. McCarran also closely allied with Sen. Joseph McCarthy in his deranged political witch hunts during the Red Scare days of the 1950s.

In addition, McCarran was known for patronage politics and for unleashing especially ruthless attacks on his critics. His targets included the Sun’s founder, Hank Greenspun, who McCarran attempted to silence by strong-arming resort owners to withhold advertising from the publication under threat of losing their gaming licenses.

It didn’t work. Greenspun refused to be bullied, and instead fought back in court and by working with the Sun’s advertisers to regain their business.

McCarran made positive contributions to Nevada, no doubt. He became a Washington power broker who steered several federal defense and aviation projects to the state. Hence his name on the airport.

But whatever good McCarran did for Las Vegas and Nevada is more than overshadowed by his bigotry, his nationalistic bent and his politics of fear and intimidation. Any vote against the renaming proposal is an endorsement of his anti-Semitic and ant-immigrant politics.

Segerblom got it right when, during a recent county commission meeting, he said McCarran’s name “doesn’t represent the diversity of our community.”

Las Vegas is a special place that is far ahead of the curve in terms of ethnic diversity and integration, where we value how members of minority communities enrich our culture and our economy. McCarran’s name shouldn’t hold a place of honor. Reid’s should.

Think of the airport name change this way. Say you were headed to the airport with your children or grandchildren when one of them pointed at the name on the sign and asked, “Who’s that?”

Reid’s name and all it stands for offers a welcome, while McCarran’s says “stay out.” Which one should greet the tens of millions of people who come to visit Las Vegas?

There’s no comparison. This name change needs to happen.