By Jack Maidment and Jack Elsom for MailOnline

Mr Zahawi said he had spoken to England’s Deputy Chief Medical Officer Jonathan Van Tam this morning about the study as he insisted the vaccine ‘does protect against severe disease’.

He said that through its own trials AstraZeneca is ‘confident that it does effectively deal with serious illness, serious disease and hospitalisation’.

Meanwhile, Mr Zahawi revealed that the UK’s vaccine roll-out almost hit 1,000 jabs a minute yesterday as he said he believes the Government will have vaccinated all over-50s by May.

A small trial of just 2,026 people in South Africa found the Oxford/AstraZeneca jab had ‘limited efficacy’ in protecting against mild and moderate disease caused by the mutant strain, which has been found in 11 people in the UK who have not recently travelled from abroad.

However, nobody died or was hopitalised during the study by South Africa‘s University of the Witwatersrand and Oxford University, which has not yet been published but has been seen by the Financial Times.

The pharmaceutical giant said scientists have already begun adapting the vaccine to better protect against the new variant, with hopes a booster shot will be ready by autumn if required.

Nevertheless, the announcement will increase the temptation on governments around the world to introduce stricter border controls to control the spread of coronavirus variants – at least until updated vaccines are available or the threat is shown to be manageable.

The UK is currently conducting mass testing in eleven areas where the South African variant has been found.

An AstraZeneca spokesman said: ‘In this small phase I/II trial, early data has shown limited efficacy against mild disease primarily due to the B.1.351 South African variant.

‘However, we have not been able to properly ascertain its effect against severe disease and hospitalisation given that subjects were predominantly young healthy adults.’

Half the trial were given a placebo in the trial, meaning the effects of the vaccine were tested on just 1,113 people. 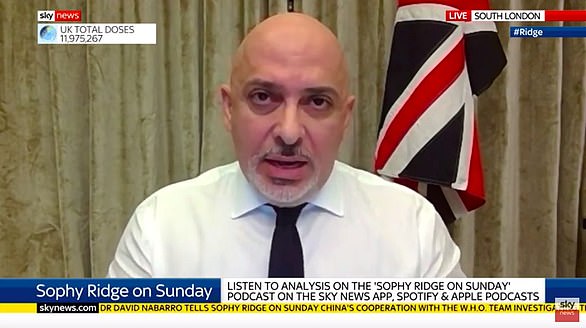 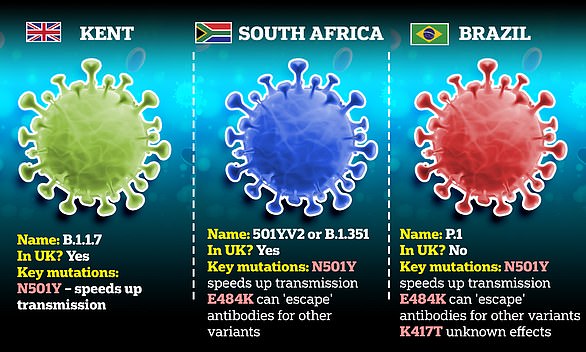 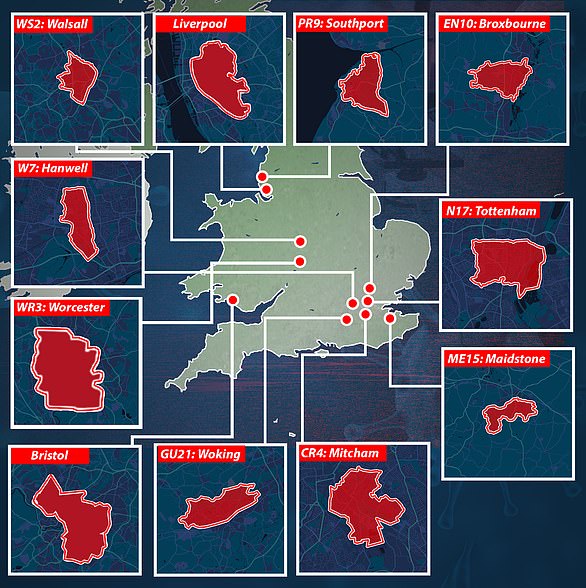 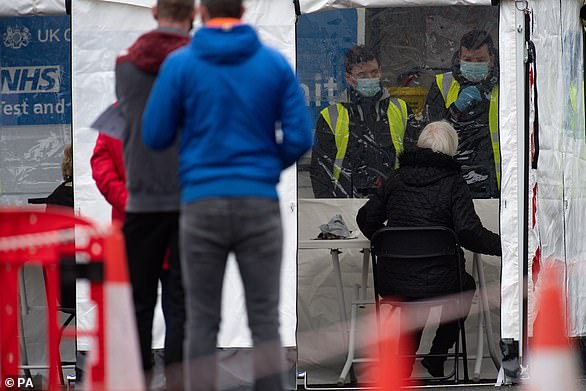 Mr Zahawi was asked during an interview on Sky News this morning if he is worried about the study’s findings.

He replied: ‘I spoke to Jonathan Van Tam this morning. Of course the good news about the Oxford AstraZeneca vaccine which is the flipside of that headline you have just quoted is that it does protect against severe disease.’

He added: ‘As I say, through their own trials AstraZeneca is confident that it does effectively deal with serious illness, serious disease and hospitalisation.’

The Vaccine Minister also revealed that the UK’s vaccine roll-out almost hit 1,000 jabs a minute at one point yesterday as the Government tries to deliver on its ambition to vaccinate all over-50s by May.

Mr Zahawi said: ‘The limiting factor is vaccine supply, so vaccine supply remains finite. I can tell you that yesterday between 11 and 12 o’clock we almost got to 1,000 jabs a minute.

‘I am confident we will meet our mid-February target of the top four cohorts. I am also confident because I have enough line of sight of the deliveries that are coming through that we will also meet the one to nine cohorts by May and we will say more about that next week when we hit the first target, I hope all goes well.’

Based on the latest figures, an average of 392,754 first doses of vaccine would be needed each day in order to meet the Government’s target of 15 million first doses – covering the top four priority groups – by February 15.

Mr Zahawi said the pace of the vaccine roll-out ‘will vary, no doubt’ because manufacturing ‘remains challenging’.

He also said the UK is not looking at introducing vaccine passports and suggested people would ask their GP to provide proof of their jab if required by other countries ahead of any future visit.

Asked if the UK is looking at introducing them, Mr Zahawi said: ‘No we’re not.

‘We have, as of yesterday, given the first dose to 11.5 million people and what they get is a card from the NHS with their name on it, the date they’ve been vaccinated with the first dose and the date for their second dose.

‘One, we don’t know the impact of the vaccines on transmission, two, it’d be discriminatory.

‘I think the right thing to do is make sure people come forward and be vaccinated because they want to rather than it being made in some way mandatory through a passport.

‘If other countries require some form of proof then you can ask your GP – your GP will hold the record – and that will then be able to be used as your proof that you’ve had the vaccine.

‘We’re not planning to have a passport in the UK.’

The median age of the South African trial’s participants was 31, an age at which someone is very unlikely to fall seriously ill with Covid-19.

An AstraZeneca spokesman also told the FT: ‘We do believe our vaccine could protect against severe disease, as neutralising antibody activity is equivalent to that of other Covid-19 vaccines that have demonstrated activity against more severe disease, particularly when the dosing interval is optimised to 8-12 weeks’.

Coronavirus has mutated thousands of times during the course of the pandemic which is normal behaviour for a virus.

But scientists are concerned in particular about three variants which evidence suggests are highly transmissible; the ones first detected in Kent, South Africa and Brazil.

The South African variant, which has been detected across the world including in the UK, appears to be proving the most resistant to vaccines.

American pharmaceutical firms Johnson and Johnson and Novavax have both reported their shots are less effective against the strain.

Similarly, Moderna is manufacturing a booster shot to its vaccine regimen to tackle the variant, while the Pfizer-BioNTech jab was also reportedly less effective.

Britain has bought 100million doses of the home-grown Oxford-AstraZeneca vaccine and is currently rolling it out to millions.

At the same time a testing blitz is underway in parts of the country after 11 cases of the variant were identified in people who had no links to travel – suggesting it may be spreading in communities.

Public Health England confirmed that the 11 cases of the South African variant in people who hadn’t travelled to the country were found on December 22, January 5 and January 26 – the mass community testing began on February 2 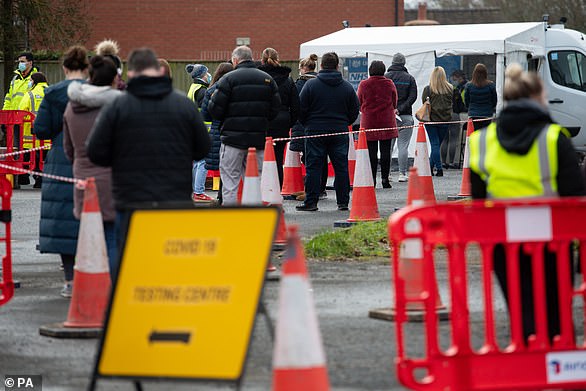 Worcestershire County Council has set up surge testing in the WR3 postcode after cases of the variant with no links to international travel were identified.

A mobile testing unit has been set up at The White Hart pub in Fernhill Heath, near Worcester, for adults with no symptoms living within walking distance.

A drive-through testing site is planned to open in the coming days, and door-to-door testing will also be made available.

Worcestershire County Council said: ‘Working in partnership with NHS Test and Trace, every person over the age of 18, living in the WR3 postcode and some WR9 postcodes, is strongly encouraged to take a Covid-19 test this week, even if they are not showing symptoms.’

Dr Kathryn Cobain, director for public health in the county, said: ‘I urge everyone offered a test to take it up to help us to monitor the virus in our communities and to help suppress and control the spread of this variant.’

Door-to-door and mobile testing began at the start of the month as part of urgent efforts to swab 80,000 people.

Testing of around 10,000 people in Maidstone, Kent, was completed on Thursday night.

In Surrey, testing in Woking was expected to finish on Friday with door-to-door deliveries in Egham and Thorpe due to begin on Saturday.

Sefton Council said efforts to identify the variant in the Norwood area of Southport in Merseyside would continue into the weekend.

Testing in Broxbourne, Hertfordshire, is being rolled out for another week until February 12, the council said.

Around 10,300 people in Walsall have been tested so far and some 560 tests had been conducted in the affected areas in Birmingham, the West Midlands Combined Authority was told.

Testing will also continue into next week in Tottenham, north London.