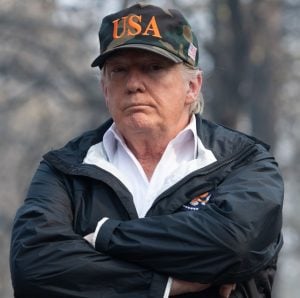 You make the best case you can for your client. Even if that case involves standing up with a straight face and pretending that the former president is actually an employee at his own club and is thus allowed to live on the premises.

As reported by the Washington Post, the former president signed an agreement in 1993 when he sought approval to open the private golf club that stipulated he would not live on the premises and which restricted guests to three non-consecutive seven-day stays per year. But now that he’s persona non grata in New York and all the appeals of his November 3 eviction from D.C. were rejected, Trump is looking to make his home at the club.

Hence the claim that the former president is a “bona fide employee” entitled to live at the club. Like a groundskeeper housed in a shack next to the golf course, but in a palatial villa and with his own table in the dining room.

“This guy as he wanders the property is like the mayor of the town of Mar-a-Lago if you will,” Marion told the town council, according to the South Florida Sun Sentinel. “He is always present. He’s ever present. He loves it there, and he loves the people that he sees there. He enjoys it. It is his home.”

“He oversees the property,” Marion, added. “He evaluates the performance of the employees. He’s constantly doing that. He suggests improvements of the operation of the club. He does that constantly. You can ask the members.”

And if the members weren’t convinced that Trump was dutifully inspecting the golf course on sunny mornings — all 18 holes, so dedicated! — and the dining room every night, Marion helpfully included a memo reminding the council that his client routinely spent more than 21 nights a year in the “Owner’s Suite” before his presidency, and the town never objected.

“It has always been the case, before and after the execution of the Agreement in 1993, that President Trump has resided in the Owner’s Suite when at MAL, a use which has been far in excess of three visits per year and has never been challenged,” the lawyer wrote. The fact that this use now “threatens to make Mar-a-Lago into a permanent beacon for his more rabid, lawless supporters,” as Philip Johnston, attorney for Preserve Palm Beach, told the council, is of no moment if the town slept on its rights for 25 years.

(Laches again! What are the odds?)

Marion also hinted that if the council ruled against his client, they might live to regret it, finding traffic disrupted by daily trips between home and golf course for the president and his entourage.

And indeed the former president looks likely to get his way again.

“It seems there is nothing … that would prohibit him from living in the owner’s suite,” Palm Beach Town Council President Margaret Zeidman said Tuesday.

So mazel tov to Mr. Trump on finally getting some honest work.

Trump is free to live at Mar-a-Lago, despite neighbors who want him evicted, Palm Beach council president says [Sun Sentinel]
Trump Clings to the Presidency—of Mar-a-Lago [Daily Beast]
As Trump’s impeachment trial kicked off, Palm Beach argued about whether to evict him from Mar-a-Lago [WaPo]

Elizabeth Dye lives in Baltimore where she writes about law and politics.;