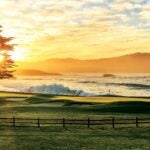 The 18th hole at Pebble Beach.

You’ve played golf alone. Or with one, two or three people you know well. But, very likely at some point in your golfing life, you’ve also been matched with someone you are meeting for the first time on the first tee. And every so often, that stranger does or says something so unusual during the round that you remember him or her way more than any of their shots. Welcome to our three-part ode to the most memorable of those random partners. Part I is here. Part II is below and tells the story of a round with three baseball stars at Pebble Beach. The grand finale, Part III, is next week and features more celeb groupings.  — Nick Piastowski

One summer afternoon in 2005, while touring Monterey with a childhood friend from Boston who had come to visit me in my adoptive home of California, I wangled a last-minute, super-twilight tee time at Pebble Beach — one of those late slots that the course sometimes offers at a media discount.

It was August. Long days, late-evening sunsets. Still, the pro shop warned us: We might not finish before dark.

Pebble in the gloaming? At a reduced price?

From where we stood — a pair of underemployed golf junkies in early middle age — the prospect ranked among the most exciting moments of our sporting lives, second maybe only to the previous fall’s World Series, when our beloved Red Sox finally broke the Curse.

Stepping to the first tee, at just past 4 p.m., I figured we’d be joined by another cheapskate twosome. But we were sent off on our own, with much of the front nine open before us.

After breezing through the opening holes, we hit a slowdown on the par-5 6th. It was there, while climbing a sharp rise in the fairway, that I looked back to see a three-ball coming up behind us. Even from a distance, I thought I recognized one of the trio, something in his leisurely, bow-legged gait, the deceptive kind of shuffle you often see from athletes who can turn on sudden bursts of blazing speed.

On the 8th tee, when they caught us, my inkling was confirmed. The bow-legged guy was Johnny Damon, the fleet-footed former Red Sox center fielder and one of Boston’s heroes from 2004, though no longer sporting the Castaway beard from that glorious championship run. He was clean-shaven now, having jumped ship in the off-season to the Yankees, a regime so joyless that it forbade facial hair.

I recognized Damon’s playing partners, too. One was Andy Pettitte, the Yankees’ southpaw ace and Red Sox killer. The other was none other than Mr. October, Hall-of-Famer Reggie Jackson, among the chief tormenters of my youth.

My buddy and I swapped slack-jawed glances, not so much star-struck as we were gobsmacked by the surreal-ness of it all: a couple of Mass-hole nobodies meeting up with three major somebodies, on one of the most storied sites in golf.

Not that their presence should have been much of a shock. Jackson, I knew, had a home in Monterey, while Damon and Pettitte had their own good reasons for being in Northern California: The Yanks were playing the A’s that week.

Even so, of all the chance encounters!

“You guys want to join us?” I asked, trying hard to make the offer come off casually.

To my surprise, they did.

And so off we went as a five-some, marching up the cliff-side 8th hole, the Pacific Ocean crashing to our right.

As giddy as we were, my friend and I took pains to play it cool. At least, I did, abiding by my number-one red carpet rule: When you meet a famous person, avoid bringing up what they’re famous for. Almost any other topic is a better choice. In my handful of run-ins with members of the Vanity Fair set, this code of conduct has served me well, perhaps most notably in 2010, when I played a few holes with Justin Timberlake on a course he had purchased outside of Memphis. At the end of our brief outing, before being whisked off by his entourage, Timberlake shook my hand, thanked me for coming and then thanked me again for not having sung to him in falsetto. (I didn’t tell him how tempted I’d been.)

Out on Pebble, meanwhile, it was clear that my friend was similarly tempted by the pull of fame. On the 13th hole, he could no longer hold his tongue.

“Just so you know, we’re rabid Red Sox fans!” he blurted, as the five of us stood waiting by the tee. “But don’t worry, Johnny, we still love you.”

“Glad to hear it,” Damon answered, amiably, and why not? It was probably only the 60,000th time someone had trotted out that line.

The pluckier response came from Jackson.

There it was. The icebreaker. License to talk smack.

“Oh,” I said, with mock innocence. “What sport did you used to play?”

Jackson made a noise that sounded like a scoff, which I chose to read as a signal of respect: You know, game recognizing game.

Unbeknownst to Jackson, this was not our first face-to-face. At some point in my late-1970s Boston-area childhood, a grade-school friend of mine landed a pair of tickets to a Red Sox-Yankee day game, and so, of course, we skipped school to attend. The seats were primo, along the third-base line, so close to the visitors’ dugout that we could hear the chatter. At one point, in what must have been the middle innings, with the Yankees at bat and Jackson kneeling in the on-deck circle, my friend and I did our Fenway civic duty by screaming ourselves hoarse while making it plain to No. 44 just how badly we thought he sucked. Though we were certain he could hear our heckling, Jackson gave no indication that he did. He never turned his head, never shifted positions. He just kept kneeling, staring at the pitcher.

Then he got up and belted a tape-measure dinger.

If that was bad, worse was still to come.

After rounding the bases and high-fiving the teammate he’d knocked in, Jackson was trotting toward the dugout, showered by boos, when he stopped, looked up and scanned the box seats until he located me and my buddy. Locking our eyes in his stare, he smiled and tipped his cap, then ducked out of view.

No wonder the man had his own candy bar.

What else can I tell you about that day at Pebble? Though our round progressed at a glacial pace, many of the details blur now in my mind. A few stand out.

I remember, for instance, that Damon, a left-handed batter, played golf right-handed (a habit he attributed to the fact that right-handed clubs were what he had in his garage when he was a kid) and that he played pretty badly but never groused about it; that Pettitte was soft-spoken and exceedingly polite, and that he absolutely pured it, with Tour pro tempo; and that Jackson, one of the most prodigious hitters in baseball history, was a relative short-knocker, with warning-track power off the tee.

Aside from that, what I recollect most clearly is a round of golf that was both exceptional and totally routine, on a special course, in special company, but still, in the end, a round of golf, with all its familiar rituals and rhythms. Good shots, bad shots. Birdies, bogeys, banter. We tended the flagstick for one another, formed search parties to hunt for errant drives, rooted for one another’s putts to drop. The game is like that, a great equalizer, forging bonds, however fleeting, between people of all walks of life, bringing them together in a friendly, shared pursuit: stars and civilians, bombers and hackers, Yankee idols and Yankee haters alike.

When the day drew to a close, the warning from the pro shop hadn’t come to pass. We finished before dark, albeit by a whisker, the sun a blip on the horizon as we reached the 18th green.

When the final putts dropped, we shook hands and parted ways.

“Good luck against the A’s,” my buddy called out. Our three playing partners — Johnny, Andy, Reggie — turned and waved. I never asked, but I’m guessing they got out at a discount, too.

A golf, food and travel writer, Josh Sens has been a GOLF Magazine contributor since 2004 and now contributes across all of GOLF’s platforms. His work has been anthologized in The Best American Sportswriting. He is also the co-author, with Sammy Hagar, of Are We Having Any Fun Yet: the Cooking and Partying Handbook.