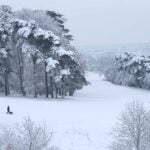 Not much will keep golfers off a course — well, other than a foot or two of snow.

January was oddly warm here in Philadelphia, the new year continuing like the old one. That is, broadly off. A dozen January days were suitable for golfing, including the Sunday sendoff. I made the scene often, sometimes alone, often with friends, balls in the air at noon, at 1, at 2. Playing in — moon rising a few times, air cooling — my mind would drift to our evening routine at home. Our nightly fire.

My wife and I have made more fires in our living room fireplace in the past half-year than we did in the 30 years before that combined. Lately, we’ve had two-a-days: one fire before our staggered breakfasts, a revival around suppertime. The fireside equivalent of 36 holes.

A new hobby for this reporter is hunting for kindling on city streets (in a leafy part of our adopted city). Along with various collected twigs, the New York Times is repurposed, too. An expired Op-Ed page gets crumpled and placed in the flue, to help start the draft. Down below, amid the kindling, two or three other newspaper balls are lodged. Above the kindling, on a black-and-gray grate, lies the firewood. Two logs, or three or four, according to mood.

The firewood itself — irregular and splintery hardwoods split by a man named Mike with a Russian accent and a reliable truck — has its own history. I don’t know it, though I should. We’ve been through the better part of a cord since Columbus Day and we’re due for a new load. I’ll stack it in the backyard and move chosen pieces to the ring by the rear door as needed. (A thing in this world I can actually manage.) When there is no wind, the sweet aroma of our fires is sometimes lodged in the air above our yard.

Tonight, to turn this account into play-by-play, a new pleasure emerged. I took the poker, balanced a piece of Sunday’s pizza on its prongs and warmed a slice practically on the burning logs. The dough was warm and charred and you could smell burned wood in the cheese. Fire awakens your every sense, but be careful with touch.

Fireplaces draw. The corner fireplace in the restaurant, the hearth in the clubhouse, the Franklin-style stove in Bob’s kitchen. (A fine chef and better-ball partner.) Kevin Costner does his best thinking on Yellowstone staring into his walk-in fireplace. Maybe that 12 he made in Tin Cup still haunts him. Golf in the Kingdom without fireplaces is a lesser book.

When our ancestors learned to harness fire, life got better. Wolves were drawn to the fire and over time became man’s best friend. Fire itself was domesticated, too. The living room fire, no matter how comforting, still carries the distant prospect of terror. Controlling it is an awesome responsibility. Beneath the comfort and the warmth, the stakes are high.

If the fire is a good one, your wife might say, “Nice fire.” That is, Christine might. She was dubious about the pizza experiment until she had a bite. That emboldened me to bring in a baked potato in need of a warm-up. My friend Doug cooks family dinners in his fireplace, including the soup course. A steel-shafted 1-iron — head off, tip pinched — is a handy fireplace cooking tool.

In Christine’s accounting, she makes half our fires. I say it’s 80-20, me. The truth is surely 80-20. My informal reporting (that is, observing Bob, talking to Doug) tells me that the fireplace is a hideous bastion of chauvinism. (The leather fireplace gloves at our hardware store are one-size-fits-all and that size is huge.) Christine’s fireplace methods could not be more different than mine. She’s all light-it-and-leave-it. I blame her Southern California childhood, with a gas fireplace. I tend. I wait for her to leave the room, remove a floppy piece of cardboard from a big wicker kindling basket and fan the flames. As for the late-fire poke, the one that sparks life into tired logs, it’s all in the wrists.

Midnight’s coming in as I type this. Marc Cohen’s cover of “Maybe I’m Amazed” is in our ears, courtesy of Spotify. Through the window, in the mounting snow, I can see my local golf season finally ending. It was a good one. Never carried 14 clubs and never missed the ones I didn’t have. Found more balls than I lost.

If you’re lucky (we’ve been lucky) you’re riding this thing out with a new appreciation for Thoreau, for simplify, simplify. Henry D., wherever he’s at, must be pretty pretty pleased with himself.

And now there are glowing embers, pulsating with heat, where the kindling lay hours earlier. We turn off the reading lights and those wood coals go from sunset orange to cranberry red. Some show. A chaotic world, spinning with heartache and promise, seems far away, even though, in truth, it’s out our front door and a few clicks away on the upstairs TV. It’ll still be there in the morning. We’re in no rush.

Michael Bamberger writes for GOLF Magazine and contributes to GOLF.com. He also participates in podcasts, primarily in tandem with Alan Shipnuck. Earlier in his career, he was a senior writer for Sports Illustrated for 23 years and a reporter on The Philadelphia Inquirer for nine years before that. He has written a half-dozen books about golf and other subjects. His magazine work has been featured in multiple editions of The Best American Sports Writing. He holds a U.S. patent on a utility golf club called the E-Club. In 2016, he was given the Donald Ross Award by the American Society of Golf Course Architects, the organization’s highest honor.