In October 2019, about a year before Election Day, a lawyer representing Donald Trump made a striking argument before a courtroom in Manhattan. Even if the President were actually to shoot someone on Fifth Avenue, he could not be charged with a crime while in office, the lawyer, William Consovoy, told the court. He was careful to note, however, “This is not a permanent immunity.”

That much is beyond dispute. While legal scholars have long debated whether a sitting President can be charged with a crime, they tend to agree that former Presidents are fair game. Their immunity from prosecution disappears when they leave office, and that is a sobering thought for a President with as many legal vulnerabilities as Trump.

Prosecutors in Manhattan spent the past year investigating the alleged hush money Trump paid in 2016 to Stormy Daniels, an adult-film star. Special counsel Robert Mueller found evidence that Trump obstructed justice on at least three occasions, and as many as 10, during the investigation of Russian interference in the 2016 elections. Then there are the civil lawsuits–dozens of them–and the issues stemming from last year’s impeachment inquiry, which found that Trump used military aid to squeeze Ukraine for a political favor.

Trump has denied wrongdoing in all these cases, and he routinely dismisses the investigations against him as hoaxes and witch hunts. His attorney Jay Sekulow did not respond to TIME’s request for comment.

Jack Goldsmith, a Harvard legal scholar who served as Assistant Attorney General under President George W. Bush, says the question of whether to prosecute will be among the toughest facing Joe Biden’s Administration. “He will be under enormous pressure from elements in his party to investigate Trump,” Goldsmith says. But that doesn’t mean Biden will do it–or should. No President in U.S. history has faced prosecution for actions taken in office after he stepped down, and Biden has said he would let the Justice Department decide whether to challenge that norm with Trump. 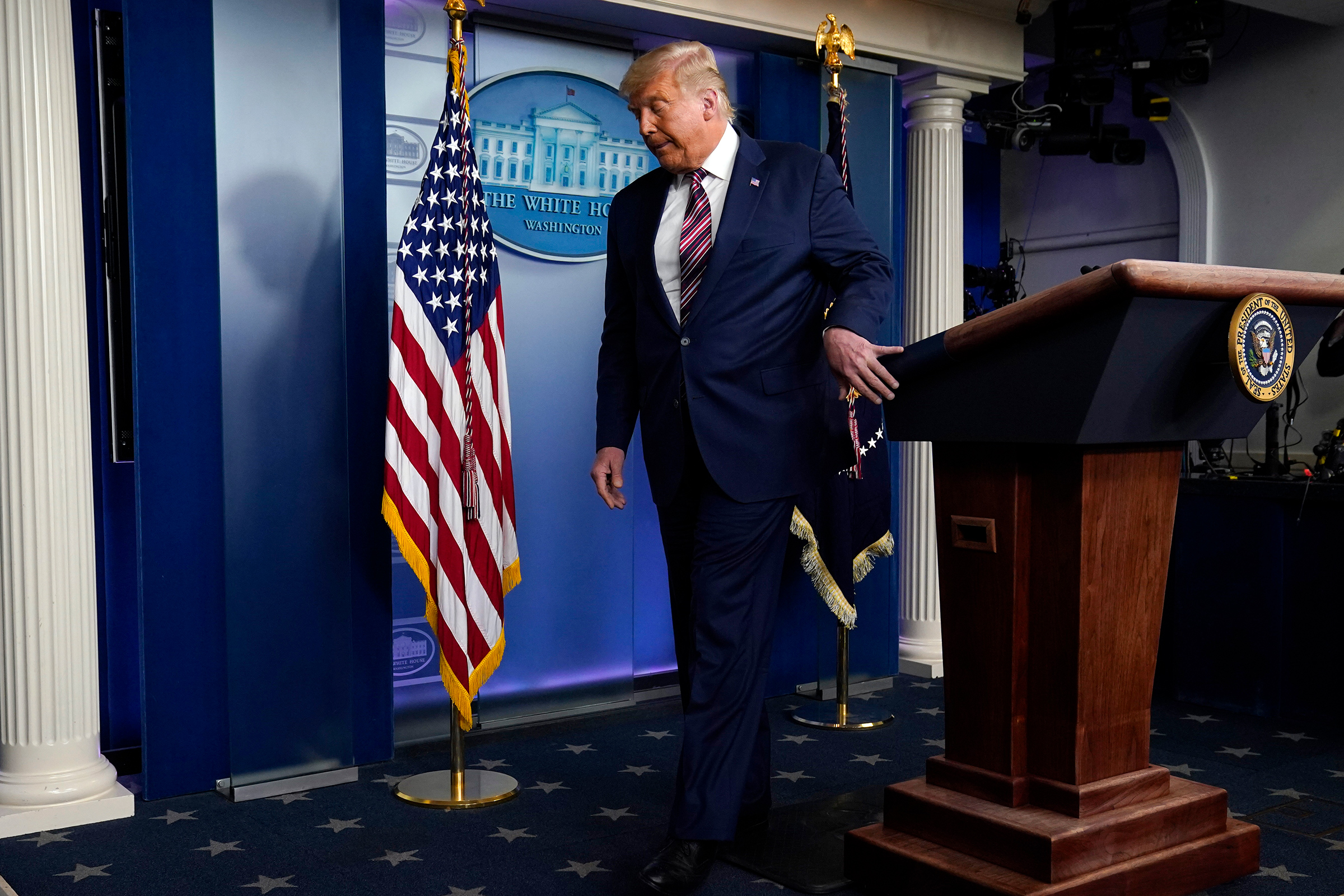 President Donald Trump leaves the podium after speaking at the White House on Nov. 5, 2020.

The case posing the most immediate legal threat to Trump is one arising from actions he took before becoming President, says Barbara McQuade, a former U.S. Attorney in Michigan who is part of Biden’s transition team. While probing the payments to Daniels, Manhattan prosecutors cited news reports alleging that Trump had falsified the value of his assets in order to receive bank loans. Trump’s former lawyer Michael Cohen provided the House Oversight Committee with financial statements that he said were evidence of the way Trump “inflated his total assets when it served his purposes.” He testified that this was common practice for his then boss, whom he called a “con man.”

The district attorney in charge of that case, Cyrus Vance, has said he is looking into the Trump Organization’s “possibly extensive and protracted criminal conduct,” including possible insurance and bank fraud. Vance’s office has subpoenaed Trump’s tax records, and the President’s lawyers have fought all the way to the Supreme Court to keep the records secret.

It was in trying to prevent the release of those records that his lawyer Consovoy made the argument last year about the President’s shooting someone on Fifth Avenue. The strategy ultimately failed: the Supreme Court ruled in July that Trump must comply with the subpoena. “No citizen, not even the President, is categorically above the common duty to produce evidence when called upon in a criminal proceeding,” Chief Justice John Roberts wrote for the majority.

The ruling allowed Trump to appeal in lower courts, which his lawyers were quick to do. But if Vance gets his hands on Trump’s tax records, his office may be able to build a case on documents alone, without relying on Trump’s former associates to testify against him. Says McQuade, the former U.S. Attorney: “Documents don’t lie.” Worse, for Trump, as a local prosecutor, Vance can bring a case against Trump in New York even if the U.S. Justice Department decides not to charge the ex-President with any federal crimes. Not even a presidential pardon would protect Trump from a ruling against him in Vance’s district, or in any state or local jurisdiction.

Beyond the subpoenas coming from Vance and perhaps other state and local prosecutors, Democratic lawmakers are likely to use their own powers to seek records from Trump and his aides once the Trump Administration is out of power. The Democrats and other Trump critics have repeatedly alleged that Trump violated the law before and during his presidency, and his opponents will do their best to keep the former President under intense public scrutiny in their search for evidence.

If it does emerge, Trump may face a more forgiving future on the federal level, however. When it comes to federal charges, the Justice Department would have to look at what McQuade calls the “collateral consequences”–in particular, the risk that putting Trump on trial would deepen the nation’s political divides and rally his supporters around him. Even in a prosecutor’s mind, she says, “That would count on the balance-sheet side against prosecution.”

It would not be an easy call for the Justice Department, and legal experts say there is little guidance in the law or the Constitution. The closest thing to a legal precedent is the decision not to prosecute President Richard Nixon after he resigned from office. His successor, Gerald Ford, granted him a full pardon in 1974, arguing that a criminal trial would arouse “ugly passions” and further polarize the nation.

That approach has appeal even for some Trump critics, who have warned that seeking to punish him would do more to poison the body politic than to cleanse it. “The appetite for vengeance is a symptom of the same poison,” the Harvard historian Jill Lepore recently wrote. “Lock him up cannot be the answer to Lock her up.”

Not everyone agrees. In an interview last year, before she became Biden’s running mate, Senator Kamala Harris said the Justice Department “would have no choice” but to prosecute Trump after his presidency. “There has to be accountability,” she said. “The President is not above the law.”

Biden has taken a much softer line. He pledged that he would not pardon Trump the way Ford pardoned Nixon. Nor would he interfere in the Justice Department’s decision on whether to file any charges. “The Attorney General is not the President’s private lawyer,” Biden said during an interview in August.

The interviewer pressed him for a clearer answer, and the candidate smiled. “I love the way you’re trying to get me into this thing about Lock him up,” said Biden. “I’m not going there.”

–With reporting by Madeline Roache

Get our Politics Newsletter. The headlines out of Washington never seem to slow. Subscribe to The D.C. Brief to make sense of what matters most.

For your security, we’ve sent a confirmation email to the address you entered. Click the link to confirm your subscription and begin receiving our newsletters. If you don’t get the confirmation within 10 minutes, please check your spam folder.