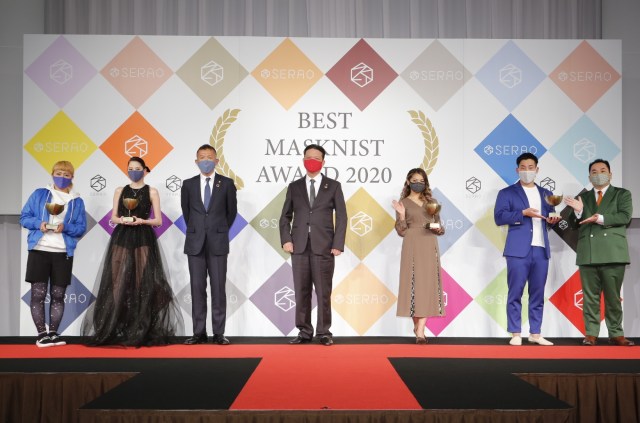 It just dawned on me that “new normal” is an oxymoron.

We’ve said time and time again that Japan by and large really likes face masks, but some may still wonder just how deep this affinity for veiling is.

On 4 November the first-ever Best Masknist Award was held at the Capital Hotel Tokyu in Chiyoda, Tokyo. This award honors the people in four categories who best exemplify the spirit of using a mask as a fashion accessory rather than just a plain old way to avoid killing people.

If this sounds familiar then you’re probably remembering the Best Jeanist Award that was also given out earlier this year for the 36th year. The concept was taken so quickly by the Best Masknist Award that they apparently forgot to remove an “n” from the name.

Still, it’s a well-intentioned event to help put a positive spin on wearing a mask. Despite the protective qualities, the fact that you can’t see other people’s smiles every day can have negative psychological effects. So perhaps by injecting some style this general malaise can be curbed.

▼ They do look happy…probably… It’s hard to tell for sure.

The Best Masknist Award 2020 was given to people in the fields of influencer/model, athlete, entertainer, and actor. In addition to bragging rights, each winner also gets a Gold Mask Trophy which is literally a trophy in the shape of a golden mask.

In the first category the Best Masknist Award went to model Yuki Kimura, affectionately known as Yukipoyo, for her commitment to wearing stylish masks. The award ceremony was no different with Yukipoyo sporting a matching ensemble punctuated with a leopard-print wide cut mask.

▼ Yuki Kimura…probably… It’s hard to tell for sure.

Accepting her trophy, Yukipoyo said to the audience, “I was honored because I had never expected to win the Best Masknist Award.”

Then again, who does expect to win a Best Masknist Award?

In the athlete category, soccer great Karina Maruyama can now put a Gold Mask Trophy next to her Olympic silver medal and FIFA World Cup 2011 champion medal. Knowing the importance of coordination on and off the pitch, she came on stage in a matching light blue mask and jacket.

▼ Karina Maruyama…probably… It’s hard to tell for sure.

Maruyama thanked the event’s sponsor SERAO for producing a mask with good breathability, which is indispensable for people with active lifestyles.

The Best Masknist Award 2020 for entertainers went to the Osaka-based comedy duo Milk Boy. Takashi Komaba and Takashi Utsumi became the toast of the comedy scene in Japan after winning last year’s M1-Grand Prix manzai competition, and have worn success well, especially when masks are involved.

▼ Milk Boy…probably… It’s hard to tell for sure.

Milk Boy stayed true to their ostentatiously Osakan roots with Komaba in a zebra print mask and Utsumi in a hemp leaf pattern.

Finally, the Best Masknist actress award went to Mayuko Kawakita, star of numerous Japanese TV shows and feature films. She came out full-tilt with a smoky blue mask that even matched with the color of the stones in her earrings and necklace.

▼ Mayuko Kawakita…probably… I’m starting to see a use for face tattoos.

Kawakita gracefully accepted her Gold Mask Trophy and told the audience, “because masks are indispensable in my life I’m honored to receive the Best Masknist Award.” And after a Q&A with all the winners, the first Besk Masknist Awards ceremony came to a close.

It seemed successful, but I think some changes will need to be made if they want to rise to the ranks of the Best Jeanist Awards. Firstly, it should be held by a consortium of mask-makers like Best Jeanist is with jean-makers. Otherwise, it kind of comes across like one big commercial for SERAO when it should be about the masks, man.

▼ SERAO boasts an affordable range of 38 different colors and patterns to suit your style, whatever it may be… just sayin’

Transparency is also important. Best Jeanist hands out its own awards but also opens up public voting; this way we can ensure that the truly best jeanists and masknists are getting their due respect.

In their defense, under the circumstances this all must have been put together quickly and there probably wasn’t enough time to do many of the things they wanted to. The underlying theme is a nice one too; that people should see masks not as a medical tool, but a way to potentially express oneself…a “facial expression” if you will.