Exhausted, out of food: How 4 fugitives were caught, with help of Arab Israelis

Exhausted, out of food: How 4 fugitives were caught, with help of Arab Israelis

Five days into a national manhunt for six Palestinian security prisoners who escaped from a high-security jail in northern Israel, police captured two of the fugitives in Nazareth Friday night. Hours later, two others — including notorious terror commander Zakaria Zubeidi — were apprehended in the nearby town of Shibli–Umm al-Ghanam.

In both cases, Arab Israelis who encountered the fugitives reported them to authorities, aiding in their capture. Police sources told Walla news that dozens of Arabs phoned in reports in recent days.

The fugitives had managed to avoid capture since breaking out of Gilboa Prison early Monday.

Two of their fellow escapees remained on the run.

Police sources told the Ynet news site on Saturday that despite earlier assessments that the prisoners had had outside help and that a getaway vehicle had driven them away, authorities now believed they’d acted alone and ha traveled on foot the entire time.

In Nazareth on Friday evening, police caught convicted Palestinian Islamic Jihad terrorists Yaquob Qadiri and Mahmoud al-Arida, the latter of whom was reported to have masterminded the jailbreak.

Prior to their arrests, the two requested food from residents of Nazareth, but locals rejected their request and alerted police, according to Hebrew media. 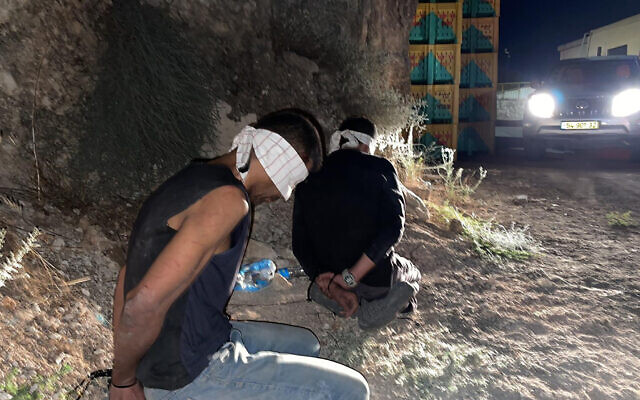 In this photo provided by Israel Police, Zakaria Zubeidi, left, and Mohammed el-Aride, two of six Palestinian security Prisoners who broke out of Gilboa Prison, are blindfolded and handcuffed after being recaptured in the Arab town of Umm al-Ghanam, northern Israel, Saturday, Sept. 11, 2021. (Israeli Police via AP) 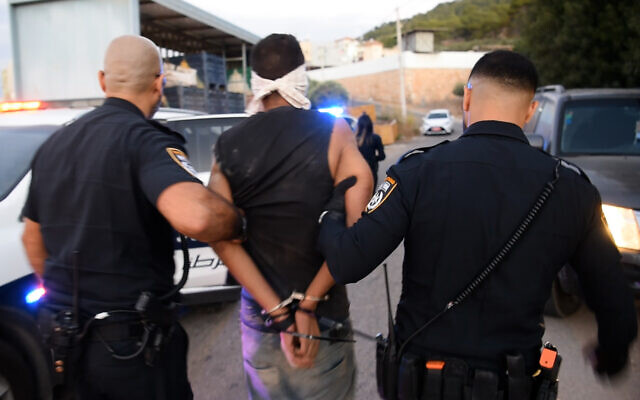 Police take Zakaria Zubeidi to a patrol car after he was captured in northern Israel after escaping from prison with other security prisoners, September 11, 2021. (Israel Police)

The next two to be captured were Zubeidi and Mohammed al-Arida, the reported mastermind’s younger brother. The two were caught early Saturday morning.

According to Haaretz, the two were earlier sighted out in the open by a dune buggy driver from a nearby village, and requested a ride. He refused and later reported them to the police. Military trackers then found their footprints in the dirt, as well as discarded cigarettes and a drink can.

The trackers managed to follow the clues to Zubeidi and al-Arida, who were hiding in a parking lot used by truck drivers.

Al-Arida was found sleeping in a semi-trailer while Zubeidi was captured nearby as he wandered around exhausted.

A security official said Zubeidi briefly tried to escape during the arrest, but was quickly overpowered. Photos from the scene showed Zubeidi with what appeared to be a large bruise on his face, but it was not clear if this was sustained during the arrest.

A local resident later told reporters that the two appeared scared and hungry when they were caught. 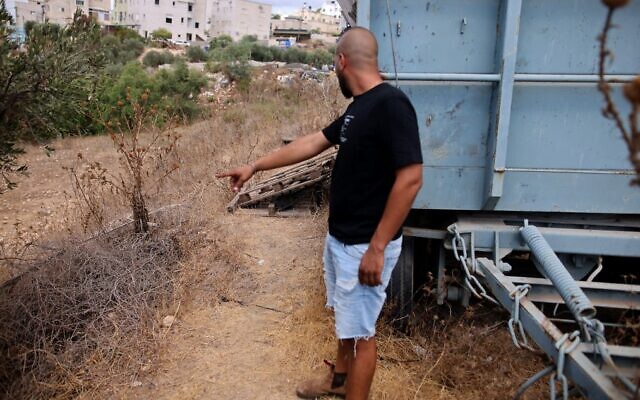 A man points at the spot where an escaped Palestinian security prisoner was recaptured in the northern Arab town of Shibli–Umm al-Ghanam on September 11, 2021. (Ahmad Gharabli/AFP)

Public Security Minister Omer Barlev vowed the remaining two fugitives would be caught and also thanked Arab Israelis “who assisted in the capture of the terrorists.”

“For four days the escapees wandered around believing they would find shelter and help among Arab Israelis, but they were mistaken,” Barlev tweeted. “Everywhere they turned, Arab citizens refused them and called police. Much respect to all the responsible citizens!”

Before the escape, Zubeidi, a commander in Fatah’s Al-Aqsa Martyrs Brigade, was imprisoned while on trial for two dozen crimes, including attempted murder.

Mohammed al-Arida was arrested in 2002 on terror offenses and sentenced to life in prison while his brother Mahmoud al-Arida, considered a senior Islamic Jihad member, was jailed for life for terrorist activity, including attacks in which soldiers were killed.

Qadiri was also serving life terms for acts of terrorism including the murder of an Israeli in 2004. Both he and Mahmoud al-Arida were reportedly involved in a 2014 attempt to break out of Gilboa.

The two prisoners still on the run are Iham Kamamji and Munadil Nafiyat, who like the other fugitives are from the area around the northern West Bank city of Jenin.

Kamamji was serving a life sentence at the time of the escape for killing an 18-year-old Israeli in 2006, a murder he reportedly expressed pride in.

Nafayat has not been charged with a crime and was being held under Israel’s practice of administrative detention, which allows it to imprison suspects without filing charges for security purposes.

For some Palestinians, the fugitives have been widely regarded as “heroes” who succeeded in freeing themselves from multiple life sentences.

Violent protests broke out at a number of locations in the West Bank after the announcement of the first arrests on Friday evening. The Hamas terror group said their detention would not “break their will.”

Shortly afterwards, a rocket was fired from Gaza toward Israel, which was intercepted by the Iron Dome missile defense system. There were no reports of injuries or damage. The Israel Defense Forces said it responded with airstrikes on a number of terror targets in the enclave.

Islamic Jihad also celebrated the escapees and warned Israel against any harm coming to them while in detention.

The six escaped from Gilboa Prison in the pre-dawn hours of Monday morning, making their way out through their cell’s drainage system and an empty space underneath the prison. 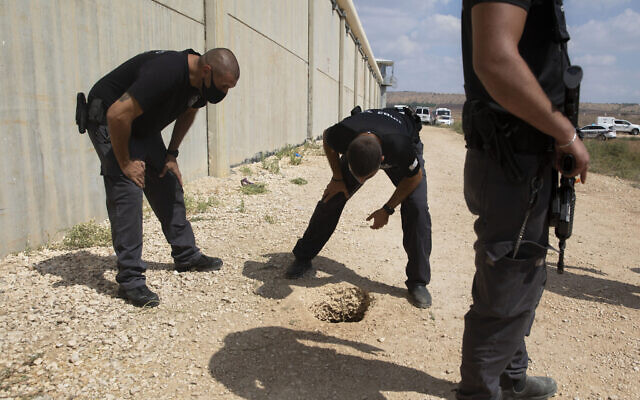 Police officers and prison guards inspect the scene of a prison escape outside the Gilboa prison in northern Israel, Monday, Sept. 6, 2021. (AP/Sebastian Scheiner)

Israeli forces have scrambled to find the inmates, all of them highly dangerous. In recent days, Israeli troops have arrested several of the fugitives’ family members, including five who were arrested in villages near the northern West Bank city of Jenin in the predawn hours of Friday morning, according to Palestinian media.

The escape exposed a series of failures at the prison and Barlev said Thursday that he had decided to form a government commission to probe the incident.

Among the apparent lapses were failure to learn lessons from previous escape attempts and a catalog of operational blunders, including unmanned watchtowers and sleeping guards.

Agencies contributed to this report.