Updated at 6:45 p.m. with more information on the vaccines.

North Texas is set to receive a large injection of COVID-19 vaccines after federal officials announced Wednesday the government will help run two massive sites in Dallas and Arlington.

The federal government will help expand Dallas County’s efforts at Fair Park and open a brand new hub in Arlington at AT&T Stadium.

A third so-called community vaccine center operated by the Federal Emergency Management Agency is expected to open in Houston, officials said. Federal resources should be on Texas soil by the end of the month.

The three sites combined should be able to administer about 10,000 doses a day, said Jeff Zients, the Biden administration’s COVID-19 coordinator.

Besides a surge in vaccines, details on how much — if anything — would change at Fair Park, which opened its drive-though operation Wednesday, were scarce following the announcement.

“This federal deal is going to be big for us,” Jenkins said in front of the drive-through on Wednesday. “My hope is we’ll build off what we’re doing today.”

The South Dallas site, run by the county’s health department, has faced numerous challenges since first opening in January. Just this week officials had to postpone opening the drive-through in part because generators needed to power heaters didn’t show up on time. 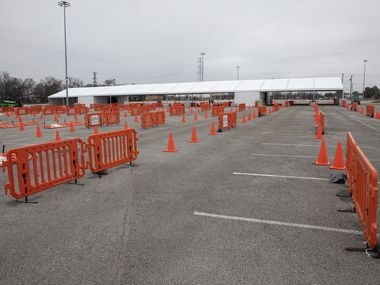 A volunteer ultimately helped the county secure portable generators, Jenkins said. And by mid-afternoon Wednesday, seven lanes were opened with cars moving at a steady clip. About 1,800 doses were administered in the first four hours it was open. That’s a fraction of what officials promised would be possible — 1,200 shots per hour.

Dallas City Council member Casey Thomas, responding to the news that federal resources were coming to Fair Park, said during a council meeting “there’s a lot of frustration with how the county is going about doing the things that they’re doing.”

“I thought Fair Park was a great recommended location, but it’s been an unmitigated disaster,” he said. “Every time we turn around, I’m getting phone calls with people who are in line at 6 in the morning and there are already lines around the corner.”

Sam Barlow, 83, of Richardson, was one of the first people to get a shot at the new drive-through. A self-proclaimed “early riser,” Barlow arrived at Fair Park at 6:30 a.m. — unaware the site was scheduled to open later than usual.

Despite the endless mixed signals about how to be vaccinated at Fair Park, the early morning standstill, and a dearth of restrooms on site, Barlow said once the line moved, the process was quick and efficient.

“I had an excellent shot,” he said. He hoped things would improve. “I am anxious to see it do well.”

County officials announced the site will again open at noon Thursday due to weather.

The three sites in Texas are part of the White House’s effort to put “equity front and center” of vaccine distribution by targeting some of the hardest-hit communities.

“These mass community sites will allow us to expand access to COVID-19 vaccinations in underserved communities and help us mitigate the spread of the virus,” Abbott said in his statement.

Tabitha Wheeler, a South Dallas community organizer and business owner, has been critical of the effort at Fair Park. Both city and county officials said the site for the first public vaccine hub was selected in order to provide access to mostly Black and Hispanic communities below Interstate 30 that might not have access to a traditional health care provider or pharmacy. 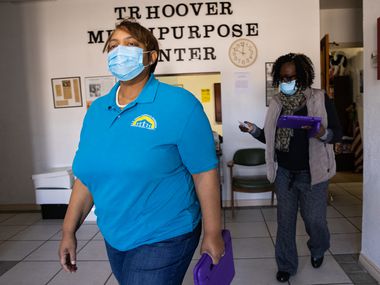 Wheeler on Wednesday said despite some efforts to increase the number of Black and Hispanic residents vaccinated, she hasn’t seen a noticeable shift.

“I don’t think the color has changed much — as far as who is in line,” she said.

Getting the shot to the state’s must vulnerable has proven difficult and so far evasive. State data shows a plurality of the people vaccinated in both Dallas and Tarrant counties have been white.

The state data is incomplete because more than a quarter of the vaccinated in both counties did not self-report their race and ethnicity.

Both Jenkins and Tarrant County Judge B. Glen Whitley said the eight weeks of federal backup will allow their public health departments to turn their attention to smaller vaccine efforts such as mobile units and popup vaccine drives.

Whitley noted the Arlington site, home to the Dallas Cowboys, was positioned in the middle of the North Texas and between two of the region’s heavily Hispanic neighborhoods.

“It’s 10 miles from West Oak Cliff, 11 miles from Stop Six neighborhood in Fort Worth,” Whitley said. “We’re the best place in the Metroplex to go.”

Short on the shot

The vaccine effort in Texas and across the nation has sputtered from the start, primarily due to a lack of supply compared to the overwhelming demand. Individual states and providers have faced their own challenges.

FEMA is now providing more than $3 billion in federal funding to 35 states, tribes, territories and the District of Columbia to help distribute vaccines. The White House announced its first federal COVID-19 vaccination sites in central California last week, with centers in Oakland and Los Angeles set to open Feb. 16.

The federal action taken under Biden reflects a change in course from the Trump administration, which largely left vaccine distribution up to the states.

“We need to ensure that all Texans get the #COVID19 vaccine when it is available to them so that we can finally crush the pandemic,” he said in a tweet. “I applaud this announcement by @POTUS that will ramp up efficient and effective vaccination efforts here in our Metroplex and across Texas.”