An Edmonton pianist who taught classical music to hundreds will also be remembered for her expansive collection of clothes, now being parcelled out to vintage-wear lovers.

Bette-Joan Rac, who was known as Madame Rac to her students, taught classical piano for over 50 years.

“She was so polite and classy,” recalled Vince Anderson, who took piano lessons from Rac until she died. “She was so warm-hearted and for her, her students were the cream of the crop.”

Rac was also a fashion lover, who over the decades amassed an impressive collection of clothing that she kept stored in her cluttered home.

After her death, the contents of the house were purchased by Alex Archbold, an antique hunter and owner of the Westmount shop Curiosity Inc, who then sold the clothing to vintage-wear sellers in Edmonton.

“She liked making an impression,” said Mark Frost, who bought the bulk of Rac’s clothing collection for $10,000.

“When she went out, she wanted people to say ‘Whoa.’ And definitely, I think she managed to pull that off.”

Frost, who has been in the vintage clothing business since 1989, was blown away by the magnitude and beauty of Rac’s collection.

He estimates the teacher had stored close to 10,000 clothing items in her home, from shoes and purses to fur coats and gowns.

Rac was born in Edmonton in 1944. Her father had a tailoring business and her mother owned a beauty salon.

She was a gifted ballerina and pianist, but when she was injured in a car accident at age 21, she channeled her creativity into a career as a piano teacher. Over 55 years, Rac taught more than 350 students.

“She was a massive musicologist,” said Anderson, who in time became friends with his former teacher.

“She was not a big performer herself, even though she could have been. She chose to teach instead.” 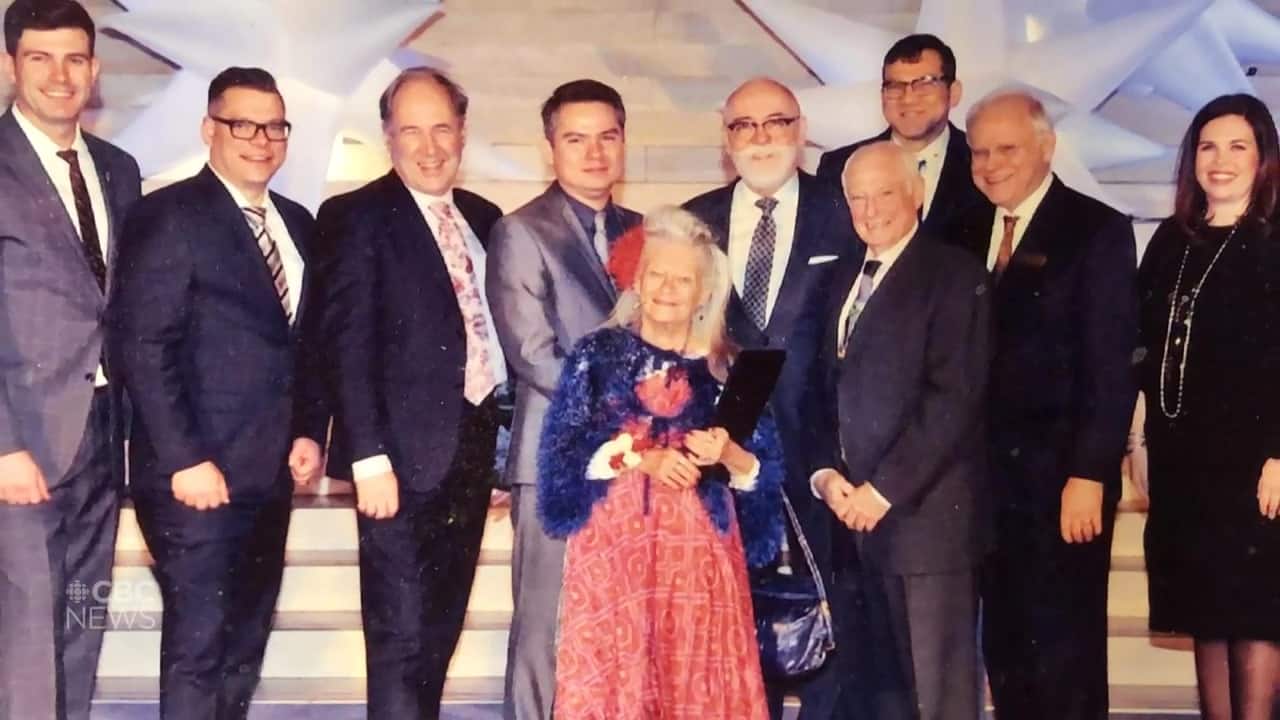 Madame Rac has made headlines for the treasures found in her Edmonton home, but her student Vince Anderson says her true legacy will live on in the hundreds of people she taught. 2:19

In 2017, she received a Salute to Excellence Citation from the City of Edmonton in recognition of her contributions to music.

“When it was awarded, she melted in joy,” recalled Anderson. “She had the program from the award ceremony, carried it with her every day and it was buried with her actually.”

Anderson finds it difficult to reconcile the unassuming teacher he knew with the collector who left behind a house full of valuables.

“She always said it was your accomplishments, your abilities, that defined you. Not your possessions.”

Rac’s clothing collection spans from the 1920s to the 1990s and includes items worn by her mother.

“It’s so fascinating because she clearly loved fashion, and she loved really good-quality fashion,” said Angela Larson, who sells vintage women’s clothes at her shop Swish.

She purchased a fraction of Rac’s clothing from Archbold, which still amounted to a few thousand items.

“The majority of it would be from the ’50s, ’60s, ’70s, just really lovely pieces,” said Larson. “She had a real eye for French seams or hand-tailoring or beautiful fabrications.”

Rac kept Polaroids of her outfits and hairstyles, many of which can be linked to the clothes unearthed by Larson and Frost.

“It would be akin to the selfies that people take nowadays,” Larson said. “It’s a great piece of history that she’s documented.”

Frost, meanwhile, has been making his way through the treasure trove. He estimates that, so far, he has been able to sort through about one-fifth of the clothing collection.

Some of the items will be kept to see on his online Etsy shops, Pontiac Dry Goods and Naked In the Bowery. The remainder will be sold to other vintage-wear sellers in the region.

The sheer magnitude of the task almost deterred Frost from buying the collection when Archbold offered it.

“This will literally take years to deal with from start to finish,” he said.  “I knew that if I took on this project, retirement was not in the near future.

“But having this opportunity land here in Edmonton, I kind of felt like I had a certain obligation to not turn my back on it and to embrace it. And I’m sure glad that I did.”

Archbold documented and shared the finds from Rac’s house with the followers of his Curiosity Inc. YouTube channel.

Many of them are now interested in purchasing a piece of the piano teacher’s legacy.

Frost is regularly fielding inquiries from people around the world who have spotted desirable items in Archbold’s videos.

“It captured people’s imaginations,” Frost said. “It’s clear to me that she truly loved this and what she was doing and I think it’s contagious.”

Larson’s Instagram posts featuring Rac’s clothing even attracted the attention of a New York costume designer, who flew to Edmonton to source some pieces.

“So some of her dresses will be in New York on television,” Larson said. “If only she knew the legacy involved in her fashion.”

Anderson believes his friend would have been pleased with the attention.

“If she was 40 years younger, she would have been the biggest Instagram influencer in the world,” he said.

“But she’d much preferred to be remembered for her students and her music than her fashion, of course, or the possessions she had.”