Nonetheless, Nakagami’s new-found speed was important. So how to explain it?

Firstly, the RC213V has always liked Aragon. It’s a fast, open circuit with lots of direction changes, where the bike can use its strong points.

Secondly, Nakagami is a changed man this year. And thirdly, Márquez’s absence has allowed HRC to give him more resources. The 28-year-old former Moto2 winner rides a 2019 RC213V but the bike has been updated, with Öhlins’ 2020 forks (with carbon-fibre inners as well as carbon-fibre outers), the latest Brembo brakes and more recently Öhlins’ BDB50 rear shock, plus the latest electronics strategies.

Honda admits that 2020 has been a hugely challenging season, firstly because Michelin’s latest rear slick has proved a real conundrum to HRC (as it has to Ducati) and second because the company lost its star rider.

“We were in crisis,” said HRC technical director Takeo Yokoyama, referring to the exit of Márquez Senior and Crutchlow. “I have enough experience of the racing industry to know that from one day to the next day many things can change, so I knew the most important thing for us engineers was to keep our feet on the ground and keep doing what we have been doing, without panicking, because if you panic you don’t go forward.”

Yokoyama says adapting both the 2020 and 2019 RC213Vs to this year’s rear slick – which features a softer construction that’s been a huge challenge for the V4s, which use more aggressive cornering lines – has been his number-one problem. 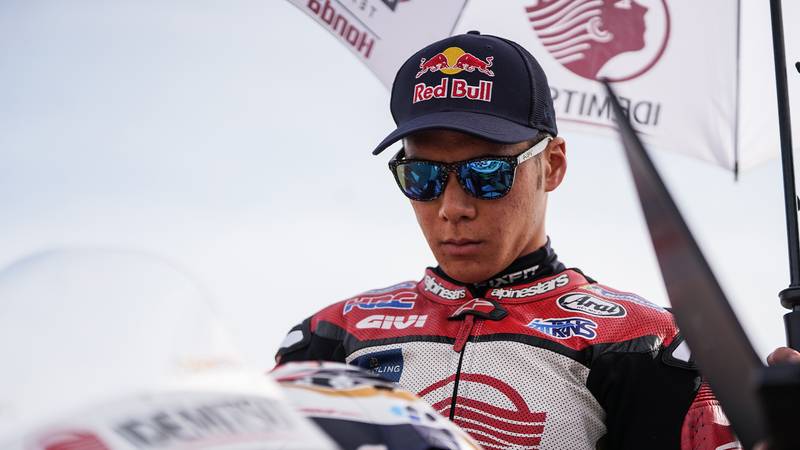 Nakagami on pole position and trying to get into the zone. In the end, his nerves got to him

“Once the season started we realised that the change from the previous tyre was more massive than we predicted – we could see that on our data,” Yokoyama added. “So we changed many, many things: electronics, exhaust, intake, chassis set-up, chassis geometry and frame stiffness. If you feel like you don’t understand what you have to understand then the only thing is to keep trying many different things. Probably we have tried 100 new things. Maybe 90 of them were wrong, a failure, but from those failures we learned something and finally we have found a way.”

This explains why Honda is now moving forward while Ducati remains in deep trouble, unable to get the 2020 rear slick to work properly.

Yokoyama has been seriously impressed by Nakagami’s progress this year – until Sunday he had been the only rider to score points in every race – which explains HRC’s new multi-year contract with him, signed last week.

“Everything was on the shoulders of Taka, using an old bike. Finally now we can say that all three riders are competitive.”

“At the first race at Jerez, Taka didn’t ride very well,” explained Yokoyama. “We know he’s normally very fast at Jerez, so we were looking for good results at the first two races. After the first race he was disappointed and I was even more disappointed. Afterwards we had a very serious meeting. I said, ‘Taka, you are at the stage of you career where you must not destroy your career – you have to do more; I have to do more for you’.

“For the second race at Jerez his mind changed and also his riding style, because we started working more closely with him, showing him data from 2019, how Marc was riding. From there he was keener to try to understand every single detail and he started to make some steps.”

LCR team owner Lucio Cecchinello has also been impressed with the new Nakagami, although he sees Honda’s 2020 problems slightly differently.

“At the start of this season everybody thought the Honda was no longer a good package,” said the former 125 GP winner. “But in reality if you look at the 2020 bike – Cal [Crutchlow] was very fast at last November’s tests at Valencia and Jerez, again at Sepang in February and then we all saw what Marc could do at the first race at Jerez, so the bike package was already strong. After Marc’s and Cal’s injury we had Alex starting his MotoGP career and so everything was on the shoulders of Taka, using an old bike. Finally now we can say that all three riders are competitive.

“Definitely this year the overall bike package for everyone is very sensitive – sometimes we really struggle, sometimes Ducati, sometimes Suzuki, sometimes Yamaha. Everything keeps changing. One answer is the new rear tyre, because we cannot generate the heat we could before. Michelin’s target was to make a tyre to keep a more consistent performance during the race, which means you need to sacrifice how much heat you build into the tyre.”

“Absolutely Taka gets better corner exits with the new shock,” added Cecchinello. “The front wheel is still on the ground – this is the key point.”

However, Cecchinello warns against too much confidence following Honda’s speed at Aragon.

“We have to keep our feet on ground because the Honda has always been fast here. We need to be aware that when we arrive at Valencia we will suffer a bit more against the Yamaha and Suzuki because it’s a tiny track where we cannot use all the power of our engine.” 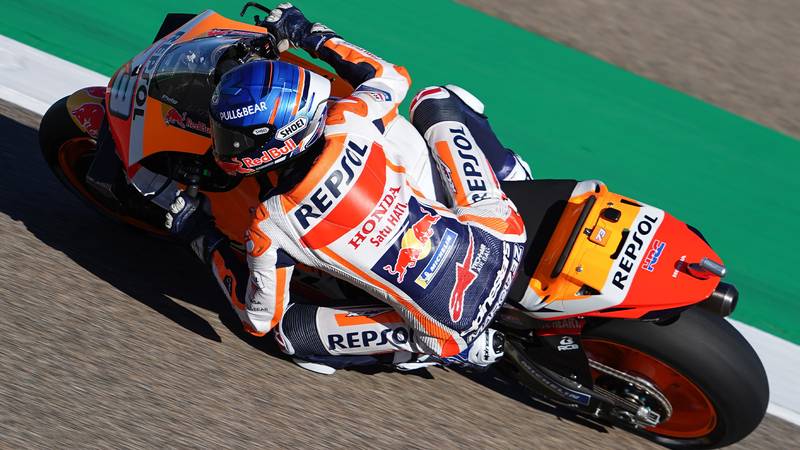 Márquez was super-fast, until he made his first real mistake of his rookie season

Márquez’s pace at Aragon One and Two was sensational – at one stage of both races he was the fastest rider on the track. That’s an impressive improvement from a rider whose previous best dry-track performance was seventh at Misano Two.

That second ride at Misano was no coincidence because it followed a one-day test at the track which the younger Márquez cites as his season turning point.

“We need to separate the first part of the season, until the Misano test, because from that test to now it’s like I’m a different Alex with a different riding style,” said the reigning Moto2 champ.

“From the Qatar tests in February I didn’t have the opportunity to have day of testing with the bike, just to catch the feeling again.

“At the Misano test we tried many things on the bike but then I said, ‘Okay, now we have tried everything, now just leave me alone on track to try things with riding the bike’. I tried some things for my riding style to improve some things and catch the feeling and the confidence that you need with this bike. This was the key.

“It’s true that Honda made a good job and gave us good things to catch again the confidence I had at the first test at Sepang, but apart from that I think it was a change in mentality, a change in how to approach the weekend, which started at Misano Two.”