BMW has developed a custom content series with Smith, highlighting the intersection of design, craftsmanship and style in both fashion and automobiles. The collaboration illustrates how Smith and his team innovated, inspired and persevered during the past year. Throughout the series are Smith’s fashion sketches juxtaposed with BMW X5 and X7 design sketches, which are collaged together with photos of Smith and the cars. These will be distributed digitally on social platforms.

Smith, who is known for his sexy, come-hither designs worn by the likes of Jennifer Lopez, Rihanna, Beyonce, Lady Gaga and the Kardashian-Jenner clan, explained how he came together with BMW, which for the last three seasons has worked with NYFW: The Shows talent, helping them tell their stories and increase their visibility.

“The way that it we came together felt very organic,” said Smith. “It was just me representing the brand and us having aesthetics that match each other. When you think of pushing the culture forward and when you think of a level of creativity and being a visionary, and the space of fashion and automobiles, to me it felt organic.” 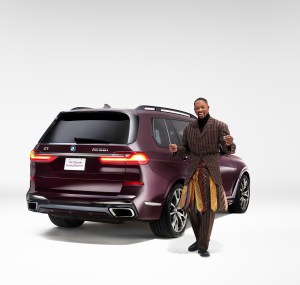 Although Smith said he didn’t get involved in the cars’ designs, he enjoyed posing with them. “The level of confidence I had when I was posing inside the car and outside the car, and even walking alongside the cars, it was really insane. If felt like these are automobiles that I can be utilizing throughout my day to day and fabulous trips over the weekend. I wasn’t part of the design process of the cars, but it definitely felt super organic to my swag and my personality.”

During NYFW, the collaboration will highlight who Smith is as a New York native designer and what it means to persevere through such a difficult time in the industry, along with the craftsmanship and style of the automobiles. Smith is scheduled to launch his collection March 9.

In discussing his fall 2021 collection, Smith said, “I really think this is a year just reinforcing empowerment and feeling strong and feeling confident and I’m working with a lot of beautiful…” He then cut himself off, not wanting to given anything away.

“LaQuan Smith has always been about a celebration of a woman’s body. To wear LaQuan Smith is an experience and it truly is as celebration. I’m just reinforcing that concept and making sure my voice is heard as a designer and also in the women’s wear space, and wanting to redefine the idea of what it feels to be unapologetically glamorous,” he added.

Smith has been in business 12 years. For fall, he said he’s inspired by things he’s done. “For me it wasn’t about reinventing the wheel, but reinforcing what I’ve already created. [Last year] was in itself a bit of inspiration, being able to see the expansion and growth of my business and my company even in the middle of a pandemic, that was inspiring. It was inspiring to see women take a piece of LaQuan Smith and incorporate it in their daily lives.”

He said the fall 2021 collection will be a celebration of all things “fabulous, glamorous and sexy.”

Describing the pandemic, he said, “It was a crazy year for sure. I’m very thankful. We did not get shut down. My company has expanded and has grown tremendously. My orders were not dropped from the retailers. That was bittersweet. I’m looking at so many companies go out of business. Being a designer in New York, it was sad to see so many companies go out of business. But I have orders to fulfill, I have things to do, I have deadlines. While the business was booming and things were moving, I had to find new ways and new strategies of juggling the success of the company and also the downfall of the Garment District.

“I have a great team behind me,” he added. “These women [customers] are out there. Whether they’re wearing LaQuan Smith in their backyard, it’s fascinating to see. It really proves that people are ready to get back out there. There will always be a call for celebration, whether it’s a birthday or someone’s getting married, or even just dressing up for your man intimately at home because you’re going to have a date night. But the point is, women want to still dress up and still want to look good. There are still reasons to feel good again. That is my synopsis of 2020. I wanted to be able to turn things around, and find some hope.”

Smith’s designs are carried by stores such as Saks Fifth Avenue, Forward by Elyse Walker, The Webster and Revolve. He also has an e-commerce business at laquansmith.com, which he said is doing “pretty well.”

He said two years ago he wasn’t selling at any of these retailers. “It’s nice to see the demand for my clothes, and me, being able to carve out in the women’s wear market, and bring sexy back again. I’m down for athleisurewear  and sportswear for being comfortable, but there’s a market for women who want to look unapologetically beautiful and I’m happy to be able to cater to that market and really stand my truth as a designer as far as creating beautiful, timeless pieces you can feel amazing in.” 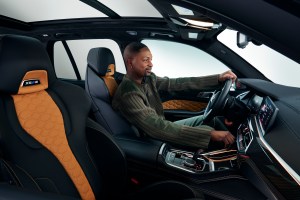 And speaking of timeless, does he feel that relates to BMW?

“Absolutely, when you think of BMW, it’s timeless and traditional. With BMW creating all these new new, powerful, more modern cars, it’s the same aesthetic with design. It’s remaining true to who you are as a brand and coming up with new concepts to find exciting things in life. What’s more fabulous than a gorgeous automobile and a LaQuan Smith dress?” he said.

Asked how he’s been able to dress celebrities such as Lady Gaga, Beyoncé and Jennifer Lopez, he replied, “I think the celebrity factor is something that happened organically over time. I have a great team and everyone does their due diligence when it’s award season and such. More importantly, they just so happen to be pop stars and celebrities, they want something of quality and is exclusive and is so sexy. I’m happy to be just even a thought. There’s been so many opportunities on the table that I did not make Just even being considered for a project is enough for me. Over time, when these women are putting on the clothes and are seeing the reactions they’re getting from men, from women and their peers, it’s inspiring. It’s that ‘it’ factor that people are coming to me for. They’re coming to me for something that’s not only exclusive and very well made, but it’s also like, ‘you are the star.’ To wear my clothes makes you a star, whether you’re a star or not. That’s the power of wearing LaQuan. You walk into a room and it’s all eyes on you.”