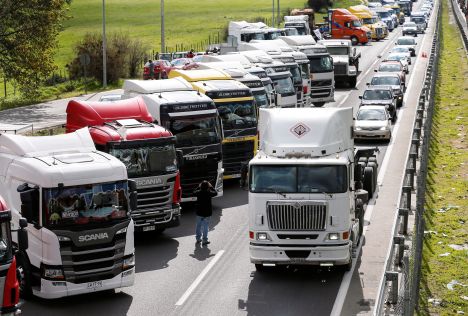 Investments earmarked in Lithuania’s draft 2021 budget for stimulating the economy may be revised next year, Ingrida Šimonytė, the Conservatives’ nominee for prime minister, said on Monday, October 26. According to her, the biggest questions arise around the so-called DNA plan, because the ambition is to make investments that have long-term consequences. The conservative Homeland Union–Lithuanian Christian Democrats two liberal parties – the Liberal Movement and the Freedom Party – were building a centre-right government coalition this week. If successful, they will have a fragile majority of 74 seats in the new parliament.

Lithuania has contested the Mobility Package, a major reform of the EU’s rules regulating road transport, in the European Court of Justice, the Justice Ministry said on Monday, October 26. Lithuania is contesting the provisions that require trucks to return to their country of registration every eight weeks, restrict cabotage operations within the EU, and change the rules for drivers’ rest without the necessary infrastructure put in place. In Lithuania’s opinion, these provisions go against EU law and European Green deal objectives, because they restrict opportunities for Lithuanian businesses in other EU countries and increase pollution on the roads.

Lithuania’s government has on Monday, October 26, placed Vilnius, Kaunas, Klaipeda and another five municipalities under lockdown and will make wearing face masks mandatory in all public spaces there.Besides the three major cities, quarantine is being introduced in the districts of Šilalė, Širvintos, Telšiai, Trakai and Vilnius. Masks will not be mandatory outside the limits of residential areas when there are no people within the radius of 20 meters, except for relatives. All in all, 21 municipalities in Lithuania have been put under lockdowns so far.

Vilnius-based Vinted, Europe’s biggest second-hand fashion platform, has taken over United Wardrobe, a Dutch competitor, Vinted announced on Tuesday, October 27. Vinted, which was present in the Netherlands before the acquisition, said that the merged group will bring together over 34 million users in Europe, which will help accelerate its expansion into new markets. Vinted became Lithuania’s first «unicorn», a startup company valued at over 1 billion euros, in November 2019. Founded in Vilnius in 2008, the company now operates in 12 markets worldwide, including Spain, France, Luxembourg, Belgium, Poland, Lithuania, the UK, and the US.

Lithuania hands in note to Minsk over Astravyets NPP

A lawyer for Russian citizen Yuri Mel, a former Soviet military officer convicted in the January 13, 1991 case, has on Tuesday, October 27, asked the Lithuanian Court of Appeal for a softer measure of suppression for his detained client. The court will issue its ruling on the measure of suppression on November 4. Mel, a former Soviet officer who served in Vilnius during the January 13, 1991 events, was detained at Panemunė border checkpoint on the Lithuanian-Russian border on March 12, 2014. He admitted to having been in one of the tanks that stormed the Vilnius TV tower in the early hours of Jan. 13, 1991 ant that three shots were fired from the tank following a commander’s order. In the spring of 2019, Mel was sentenced to seven years in prison.

Lithuania to set up centre of excellence in anti-money laundering

The Lithuanian government on Wednesday, October 28, gave the green light for setting up a Center of Excellence in Anti-Money Laundering. The decision to establish the centre follows a wave of money laundering scandals in the Nordic and Baltic region in recent years. The Finance Ministry, the central Bank of Lithuania, and SEB, Swedbank, Luminor Bank, Šiaulių Bankas, Medicinos Bankas, Revolut Bank and Citadele will be the centre’s founders.

The Lithuanian government on Wednesday, October 28, allocated 1.95 million euros for purchasing remdesivir, an antiviral medication used to treat patients with pneumonia caused by COVID-19. The funds will be used to buy Veklury 100 mg (remdesivir) for Lithuanian hospitals, the Health Ministry said. The product is to be purchased under the October 7 contract between the European Commission and Gilead Sciences Ireland UC, according to the government’s resolution. Clinical trials of this and other drugs are currently underway in Lithuania and are planned to continue until April 2021.

Center-right coalition partners expect to work out deal next week

The Homeland Union–Lithuanian Christian Democrats, the Liberal Movement and the Freedom Party expect to agree early next week on a document outlining their centre-right coalition’s top priorities, Gabrielius Landsbergis, the Homeland Union’s chairman, said in a statement on Thursday, October 29. The three parties, which will have at least 74 of 141 seats in the new parliament, have exchanged views on the principles for the formation of the coalition and its priority tasks, Landsbergis said.

Prosecutor General Evaldas Pašilis has been selected as Lithuania’s candidate for the position of a judge at the EU General Court, Justice Minister Elvinas Jankevičius confirmed on Thursday, October 29. Pašilis was chosen from among six applicants for the position. His nomination has yet to be approved by the Cabinet, President Gitanas Nausėda and the Seimas.