WALESKA, Ga. – For Reinhardt’s football players and coaches, it was a weird fall watching high schools and other colleges play out their football seasons, while NAIA officials postponed its teams’ seasons to spring 2021 due to the ongoing COVID-19 pandemic.

But now that the Eagles’ 2020 make-up season has arrived, they’re soaking it all in.

“I thought it was all completely over with,” Teon Burroughs, a fifth-year senior defensive end told FOX 5 Sports.

Burroughs wasn’t sure he would ever strap on his pads again. Now, he said he’s fine with the biggest problem being learning to play in colder weather.

“I think they all appreciate it. I don’t care if you’re a senior or a freshman. It was taken away from them, and I think they realized how much they missed it,” said head coach James Miller. “You know, we haven’t played football in 14 months. I mean, it’s been a long, long time.”

And that pent-up energy was evident in Reinhardt’s season-opener at point, a 36-3 win, with the Eagles putting up 498 total yards of offense, with 4 touchdowns and 338 yards on the ground, while giving up just 179 yards to Point. Quarterback Billy Hall completed 10 of 16 passes for 160 yards and 1 touchdown.

“A lot of the guys out here, they stepped to it, they believed, they kept the process going, and when we played Saturday, they showed it, all the work we put in over those hours and days, they showed it didn’t go to waste,” Burroughs said. 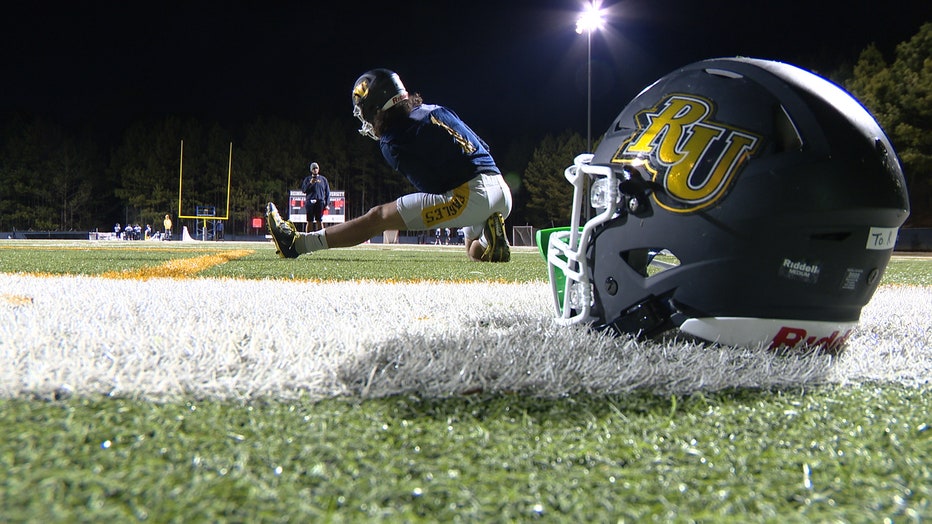 This Saturday will be the Eagles’ home opener against Faulkner, another one of the eight games against Mid-South Conference Appalachian Division foes until the regular-season finale on April 10.

But that’s a long way off as pandemic precautions still dominate our world. And after reconvening in August, about 30 Eagles caught COVID-19 in the fall, with about 60 having to quarantine, some even three separate times due to exposures, Miller said.

NAIA officials announced on July 31 that the NAIA Football Championship Series (FCS) would be moved to spring 2021. The Appalachian Division administrative council voted to postpone the 2020 fall season on Aug. 11 due to concerns surrounding COVID-19. Then on Aug. 20, NAIA officials announced that the FCS championship game is slated for Monday, May 10, 2021, at Eddie G. Robinson Stadium in Grambling, La.

The NAIA Football Championship Series begins on April 17 with the first round of the 16-team playoff. Reinhardt hopes to make it to its first FCS championship game since 2017.

“It’s crazy because we were away from each other for so long and had to social distance and couldn’t really do any team-building stuff, and I feel like they’re closer than any team we’ve had in a while,” Miller said.