A draft intergovernmental agreement on cooperation to expand and modernise Romania’s nuclear power programme has been signed between Romania and the USA. Areas for cooperation could include the completion of units 3 and 4 at the Cernavoda nuclear power plant and the refurbishment of unit 1 at the plant. 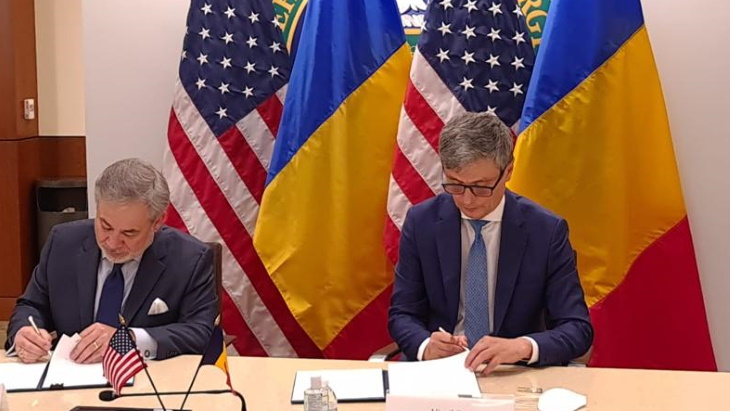 The signing of the draft agreement by Brouillette (left) and Popescu (right) (Image: Romanian Ministry of Economy, Energy and Business Development)

The draft agreement was signed in Washington DC on 9 October by US Secretary of Energy Dan Brouillette and Romania’s Minister of Economy, Energy and Business Development Virgil Popescu.

The Romanian ministry noted this represents an agreement in principle on the text and main elements of the project development and involved parties. It said the draft agreement will now be sent to the European Commission according to the provisions of the Euratom Treaty.

In addition to the construction and refurbishment projects at Cernavoda, the agreement calls for cooperation in areas such as regulation, exchanges between research laboratories and universities, staff training, as well as research and development. It also provides for cooperation in the development of small modular reactors in Romania. The US government has expressed its interest in exploring financial institutions to support the funding of these projects.

“Once formally executed, this historic agreement will lay the foundation for Romania to utilise US expertise and technology with a multinational team building reactor units 3 and 4 of the Cernavoda nuclear power plant and refurbishing reactor unit 1,” the US Department of Energy (DOE) said. “This agreement underscores the importance of the strategic partnership between the United States and Romania and our mutual commitment to energy security in the region.”

The USA and Romania will continue to strengthen our bilateral relationship under various multilateral frameworks, DOE said. These include the Partnership for Transatlantic Energy Cooperation (P-TEC) created under the Trump Administration. Under P-TEC, the USA and Romania co-chair a working group on civil nuclear cooperation. “This working group will remain a cornerstone for expanding this strategic and commercial partnership,” it said.

“Nuclear energy is crucial to ensuring Romania has a reliable, affordable, and emissions-free supply of electricity, and the US nuclear industry looks forward to providing their expertise to advance this important energy source,” said Brouillette. “This agreement between the US and Romania furthers our mutual energy cooperation and will strengthen the energy security of both our nations.”

“Today, Romania is taking a huge step forward in the development of its strategic partnership with the United States of America, in terms of the energy component, namely cooperation in the civil nuclear field,” said Popescu. “At the same time, we want Canadian and French partners in addition to our American partners. We are proving today that serious, predictable partnerships can be achieved if there is political will and sustained work.”

Cernavoda is the only nuclear power plant in Romania and consists of two 650 MWe pressurised heavy-water reactors. Unit 1 went into commercial operation in 1996 and unit 2 in 2007. Operator Nuclearelectrica plans to extend the operating life of unit 1 to 60 years. Most of the work on units 3 and 4 – like units 1 and 2, CANDU-6 reactors – was done in the 1980s prior to the fall of the government of Nicolae Ceausescu in 1989. In July, Romania launched a tender for a new feasibility study to complete units 3 and 4.