BRAVE teen motorsport champ Taylor Borthwick is about to move from the track to the silver screen with a new film all about her daredevil race career.

The 16-year-old is one of the hottest talents in stock car racing, lifting cups and titles since the age of ten and regularly takes on much older competitors across the country.

But the West Lothian racer almost walked away from the sport after boyfriend Keir Millar died in a race crash.

But Taylor, from Armadale, was instead inspired by his memory and returned stronger than ever.

Now the drive star — who has a picture of Keir emblazoned on her helmet — is raising the sport’s profile in a documentary called Racing Stock, which premieres at the Glasgow Film Festival next month.

She said: “It was really heartbreaking, I’d never experienced anything like that.

“Keir and I had raced together in karts and we became boyfriend and girlfriend. When he passed away, I thought it’d be a nice tribute to have his picture on my helmet.

“It’s a sport we’ve all grown up around — Keir’s dad and brother also raced — and it was horrible. I didn’t know if I wanted to drive again.

Lockerbie-born world champ Keir was just 11 when he was involved in a crash at Lochgelly Raceway in Fife in May 2015. He died in hospital the following day, shocking the race community.

Taylor said: “I knew that he would have wanted me to race again and for all of us to keep on racing. He wouldn’t have wanted us all to just stop, so that’s why we kept going.”

After taking almost two months away from the sport, Taylor came roaring back.

The third-generation stock car racer last year graduated to the senior leagues and marked her first senior race meet with a win. Taylor, who lives with mum Dianne, big sister Jordyn and dad Stuart, has been a serial winner since she first got behind the wheel at just nine.

She has petrol in her blood. Grandfather David Borthwick raced bangers and worked as a mechanic in the sport, while her father has been involved with race crews since he was 12. She’s also surrounded by racing uncles and cousins but, according to Stuart, 45, his daughter has always been something special.

He admitted: “She’s miles better than everybody already, definitely. She’s got the potential to go very far.

“When she started out, she was always wanting to go faster and it just came naturally. Once we got her in a good kart, there was no stopping her — she was just away. She’s got great driving ability.”

She mainly races at Cowdenbeath’s Racewall arena, inside the town football club’s Central Park stadium, but competes across the UK.

Stock car racing, where drivers batter round up to 20 laps of a 400m track, is one of Scotland’s great sporting subcultures, with a devoted fanbase and crowds of more than 3,000 for big events.

Taylor started in her first Ninja Kart class aged nine and in her second season blew the competition away — at one meet she was given a start position of 24 and battled through the crowd to lift her first championship win aged 10.

Taylor then progressed to Ministox and last March, just before the pandemic hit, was due to graduate to the Stock Rod adult class after turning 16.

She eventually made her debut in her modified Vauxhall Corsa behind closed doors, in August, and scored a win on her first night.

The adrenaline-fuelled teen has been involved in serious accidents — including flipping her car on its roof and skidding round the track upside down before hitting a wall and getting bashed so badly that her shoulder popped out.

But she’s been in love with racing since she was a tot and she and Stuart are both so confident in their safety precautions they never let the crashes worry them too much.

She said: “My dad worked with John Sibbald Racing and I remember helping out when I was three or four, cleaning the car and doing anything I could to be around, and then I started racing myself when I was nine.

“I love the feeling of going fast, that feeling of almost being out of control, I love it.

“When I won my first race, the adrenaline was so high that it’s just so amazing and overwhelming actually. I’ve not thought about racing anything else. They always say that once you’ve been to stock car racing, it’s in your blood. You just can’t get away from it, and the atmosphere really draws you in.”

The family are thrilled to star in Racing Stock, made by Patrick Steel and Charlotte Hailstone with backing from Screen Scotland as part of the Scottish Documentary Institute’s Bridging The Gap scheme for emerging directors.

Stuart said: “Hopefully it will help promote stock car racing, a lot of folk don’t know it exists but it’s a great night out for families and we hope people enjoy it.”

Taylor dreams of a world championship title but, while stock car racing in the USA can ultimately lead to the megabucks Nascar circuit, it’s an amateur sport in the UK with little prize money on offer, making it an expensive endeavour for families. 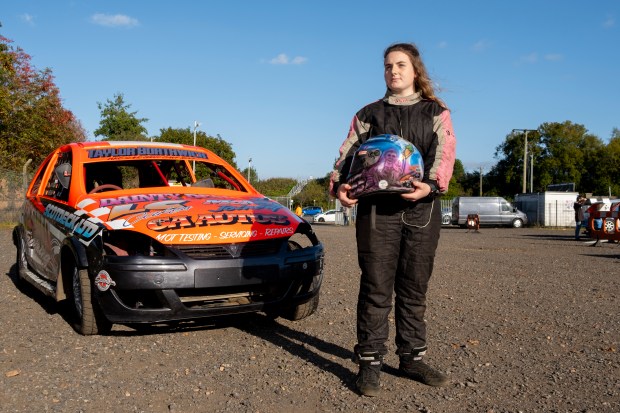 TAYLOR isn’t just one of the youngest stars of the stock car scene, she’s also one of the few women taking part.

Only ten per cent of racers are female, and she enjoys the rivalry.

She says: “Some get a bit jealous and will try to stop me winning — but they all play the same game. They don’t think ‘I can’t hit her off the road because she’s a girl’, I think I get the same treatment as anyone else.”

She hopes she is a role model for other young up-and-coming, race-obsessed girls, and has been pleased to see the youth ranks swell in recent years.

Taylor said: “When I started, there weren’t many other girls. But now, since the younger ones have been growing up and seeing more girls, they’re joining in and you’re seeing more and more there.

“It’s really good to see them coming through, winning and being successful.”

Thankfully for Taylor, several generations of mechanics help keep vehicle costs down and they’re also backed by sponsors Sibbald Training, David Philip Commercials and ACL Hire. She wants to push her racing as far as she can, but has solid, if unlikely sounding, career plans to pursue alongside her track adventures.

Body found in River Forth as cops probe mystery death

Taylor said: “I’m going to be doing hairdressing training which might sound strange and people might not think about that, but I’ve always wanted to do it.

– Racing Stock premieres at next month’s online Glasgow Film Festival, showing as part of the Turbulence event, live from February 26.
For tickets and info, visit athome.glasgowfilm.org