Has a U.S. president ever had his own exclusive sneaker? Well, former President Barack Obama does, and on Feb. 12, Sotheby’s is giving the world an opportunity to own the pair.

Sotheby’s is offering the President Barack Obama Player Exclusive Nike Hyperdunk sneakers on The Sneaker Shop, the auction house’s offering of modern, vintage and memorabilia sneakers on its Buy Now platform. The sneakers are believed to be one of only two that exist — this one a sample and the other made exclusively for Obama. The pair being offered for sale are owned by an unidentified collector.

This marks the first major drop on the Buy Now platform and the sneakers will be offered for $25,000. Beginning on Feb. 8, they will be on view at Sotheby’s York Avenue gallery.

“We were thinking about the perfect moment to release it,” said Brahm Wachter, Sotheby’s director of e-commerce development. Sotheby’s is tying the drop to President’s Day weekend, and is releasing the pair at 4:44 p.m. in honor of the 44th president of the U.S.

“This was the way to do it,” Wachter said. “We handle all kinds of items, but you can feel the excitement of our team with this. This is the first time we have something like this that is totally deadstock and in perfect condition.”

The Hyperdunk sneaker debuted in 2008 and went viral with the help of the late Kobe Bryant and the speeding Aston Martin that he jumped over wearing them. Nike also unveiled the “United We Rise’ colorway of the sneaker for the 2008 Beijing Summer Olympic Games created for and worn by members of Team USA Basketball.

The pair on offer at Sotheby’s feature embroidery of the number “44” and the Presidential Seal on the tongue. The insoles include patriotic graphics, including bald eagles and the date 1776 in reference to the year the U.S. was established. They’re a men’s U.S. size 12.5 and deemed to be in perfect condition. 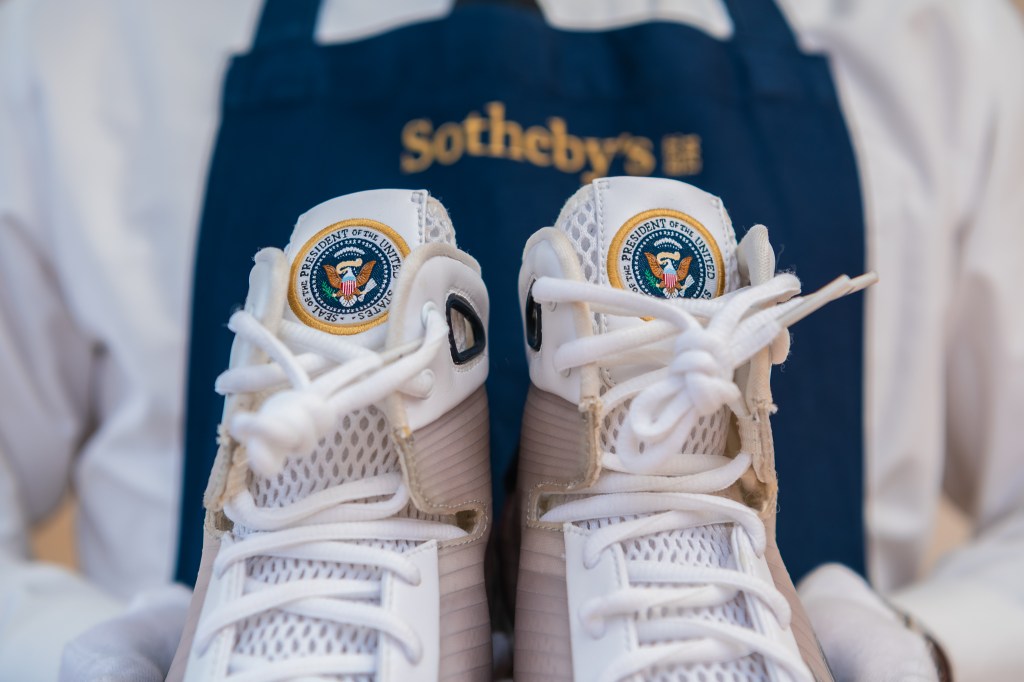 Wachter said that when coming up with the selling price for the sneaker, “we wanted to come up with a price that would be exciting to collectors. Player exclusive sneakers on the market can be competitive. We felt that this price was both conservative, but also a realistic feel for what it could achieve in other circumstances.”

Obama is an avid basketball fan, having been photographed playing at the White House — one time sporting a custom Rag & Bone bomber jacket — and also filled out NCAA tournament brackets with ESPN. He was recently captured on video sinking a corner three-point shot in Michigan while on the campaign trail for now-President Joe Biden. “That’s what I do,” he proclaimed.

His relationship with Nike goes back to his youth, when he played on the junior varsity and varsity basketball teams and won the Hawaii state championship in Nike Blazers in 1979. He also partnered with the company on initiatives during his presidency, and last year, Nike donated $5 million to the Obama Foundation for the Obama Presidential Center in Chicago and for public space to be created to promote physical activity.