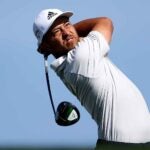 Xander Schauffele is on one of the PGA Tour’s hottest streaks in the early portion of 2021.

Welcome to Spotted on Tour, where we’ll highlight buzzy apparel, gear, gadgets and more that caught our eye over the weekend. Better yet, we’ll help you get your hands on your own.

He hasn’t broken through with a win quite yet, which makes it easy to forget that Xander Schauffele is on something of a heater.

Since the U.S. Open in September (the first event of the 2021 Tour season), Schauffele has been red-hot. His finishes during that span feature no wins, but a bevy of top results — 5th, 2nd, T17, T17, T5, T2, T2. No, your eyes do not deceive you — Xander Schauffele has gone five months since his last sub-T20 finish. Not half-bad for the former PGA Tour rookie of the year … or his bank account.

After almost half a year in contention, Xander says the catalyst behind his recent run on success is something simple. He says if he’s thinking about his score, that’s bad news. He’s at his best when he’s able to simplify his mindset.

“I never really felt [like I turned] a corner, I think,” he said at the Waste Management Phoenix Open last weekend, where he recorded another runner-up finish. “I just hung in there. I just stayed patient and worried about — whenever I’m playing really good golf I really have no idea what my score is at. Just kind of worry about every single shot, I get lost in my zone or whatever you want to call it.”

But getting into the zone is one thing, staying there for longer than a handful of rounds is something completely different. And this year, Schaufelle is staying there: He ranks second on Tour in Strokes Gained, and no lower than 31st in any of the individual strokes gained categories.

Among the X-Man’s X-factors in the early part of 2021 has been his new gear, including a Callaway Epic Speed driver that he has been striping with confidence.

Callaway’s touts its Epic Speed as its fastest driver to date thanks to a unique head construction built for improved aerodynamics. The driver also features an AI-designed structure that boosts stability torsionally, vertically and horizontally, and super-strength titanium clubface that provides faster ballspeeds across the entirety of the face.

Want to overhaul your own bag for 2021? Visit the expert fitters at our sister company, True Spec Golf.

OUR TAKE: It’s good to have options. With Callaway’s new-look Epic Max and Epic Speed, testers found two equally appealing packages: One geared for those who need a bit more forgiveness and another for the better player craving a penetrating launch. “I could put both in the bag,” said a tester. “Both were fantastic on misses, and the flatter flight of the Speed was very consistent. I could totally see myself throwing in a strong-lofted Speed and Max 5-wood to launch it high. That sounds really appealing.” Don’t be surprised if other golfers follow suit.
THE DETAILS: While the new Jailbreak system in the driver is sure to garner the most interest, it’s actually not the only club receiving a complete makeover. The Epic fairway woods feature Jailbreak A.I. Velocity Blades that are spread wider apart to stiffen the structure, allowing the C300 maraging steel face cup to flex at impact. The forward CG location on Epic Speed, combined with a new leading-edge design, promotes a strong ball flight with less spin. An oversized head and shallow face make Epic Max an ideal option for a wider handicap range. Launch and spin can be altered depending on where the two sole weights (2 and 14 grams) are positioned.